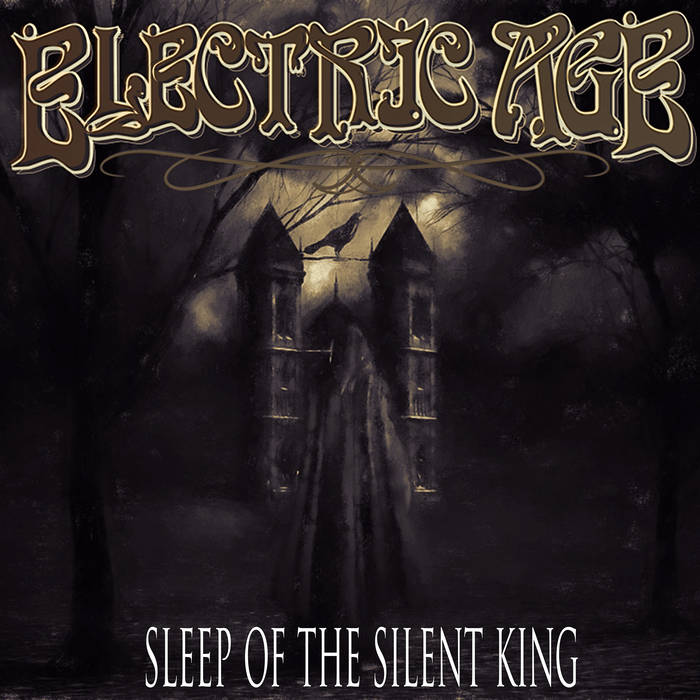 From the deep South, southern Louisiana to be exact, the birthplace of sludge-metal, comes this hybrid of all things resonating traditional metal, elements of folk / blues / stoner / doom / progressive, and a pure rock dynamic to morph it all into this, the debut offering from this three piece named ELECTRIC AGE. While this is the first release from this line-up as a unit, I was informed directly that these seasoned players have decided to forgo sharing their collective pedigree to let this album stand on its own merits in the here and now. After taking it in, I believe they have created something amazing that can indeed stand tall as an accomplishment of songwriting, musicianship and something that has been so lacking as of late in American metal; the art of storytelling. Dripping with the archetypal concepts of good, evil and the divine throughout this sojourn, the band states that this is “A conceptual and mythological journey through the threshold of time and consciousness, into the heart of darkness and divinity, through death and redemption, and finally into the inexorable void.” So, not just another “Wankfest” but actually thinking-man’s metal?? The pulse quickens…

From the first notes of ‘The Threshold’ through to the acoustic fade out of ‘The Dreaming’, there is a precision of delivery from each member of this power-trio reminiscent of DEMONS & WIZARDS  in the exacting musicality given with each track. ‘Shepard And The Raven’ comes on with a single snare-drum pop and a full-on power chord assault hits you before you know it, this chapter of the story unfolding with the might of the voice telling the tale of…

‘Robes Of Grey’ comes out of the gate with a gallop and you can’t help but to hold on as the freight train rolls on. Even when the tempo slows for a moment, you draw your breath slower until that next chord hits and you go again. Ultra thick bass serves as the intro to ‘Cold Witch’  before the hammering guitar takes you into the tale one more “Four long winters have past a ray upon the feet of cold offering…” and further into the mind of the king you are drawn as he asks her to carry him away. Soaring deep notes serve as the perfect accent to the vocal flowing forth.  The bass line towards the end reminds you of just HOW deep and dark these guys have shown they can get.

‘Priestess Pt.1’ allows you to catch your breath for a minute through intricate overlaying guitar lines, as the main body of this song, and when ‘Black Galleons’ hits with a thundering drum-line steeped in reverb; it is right on time to keep you glued to this epic journey, time shifts galore that are indeed suiting this diatribe as we hear that “We would die for the Purity and Grace” as the solo lets you traverse onward back into the thunder as the song fades out. ‘Sleep Of Winter’ wastes no time, right back to full-on ‘rock-god’ phrasing on that Les Paul and the pace does not cease to push you along at full-charge. ‘Silent King’ enters with a clean guitar tone and a slower pace again but the majesty and multi-layers of the lush mix is never gone, letting you forget that this is a trio. Our king is in self reflection as the ‘Elders’ and his feelings of being “born of the dark and will leave the same.”  ‘Priestess Pt 2’ shows more of the acoustic/folk side complete with violins in the background as “She spreads her black wings to fly”.

The last two tracks are the ones I kept going back to time and again. ‘Electric Age’ is one of those songs with enough hooks to catch a bushel of fish out of the air with and could definitely be the story behind the name of this power-trio.  The slow doom fade out into ‘The Dreaming’ is the perfect segue into the song that sums up what we have traversed over the last hour plus and offers final insight into the king’s mind in reflection and attempted remembrance. Is he awake or still in a dream or somewhere in between or…  as the ‘pick-birds’ chirp randomly, are we are all dreaming??

I have told my kids as I put them to bed to ‘dream the dreams of royalty’. I now wonder if any of their own nights were filled with tales such as this…

Each of these songs stand tall on their own, just as I was told was the intention and together, they represent a near-masterpiece.  For a first debut album, gotta give it an ’11’ on a 1-10… get it the second you can!!