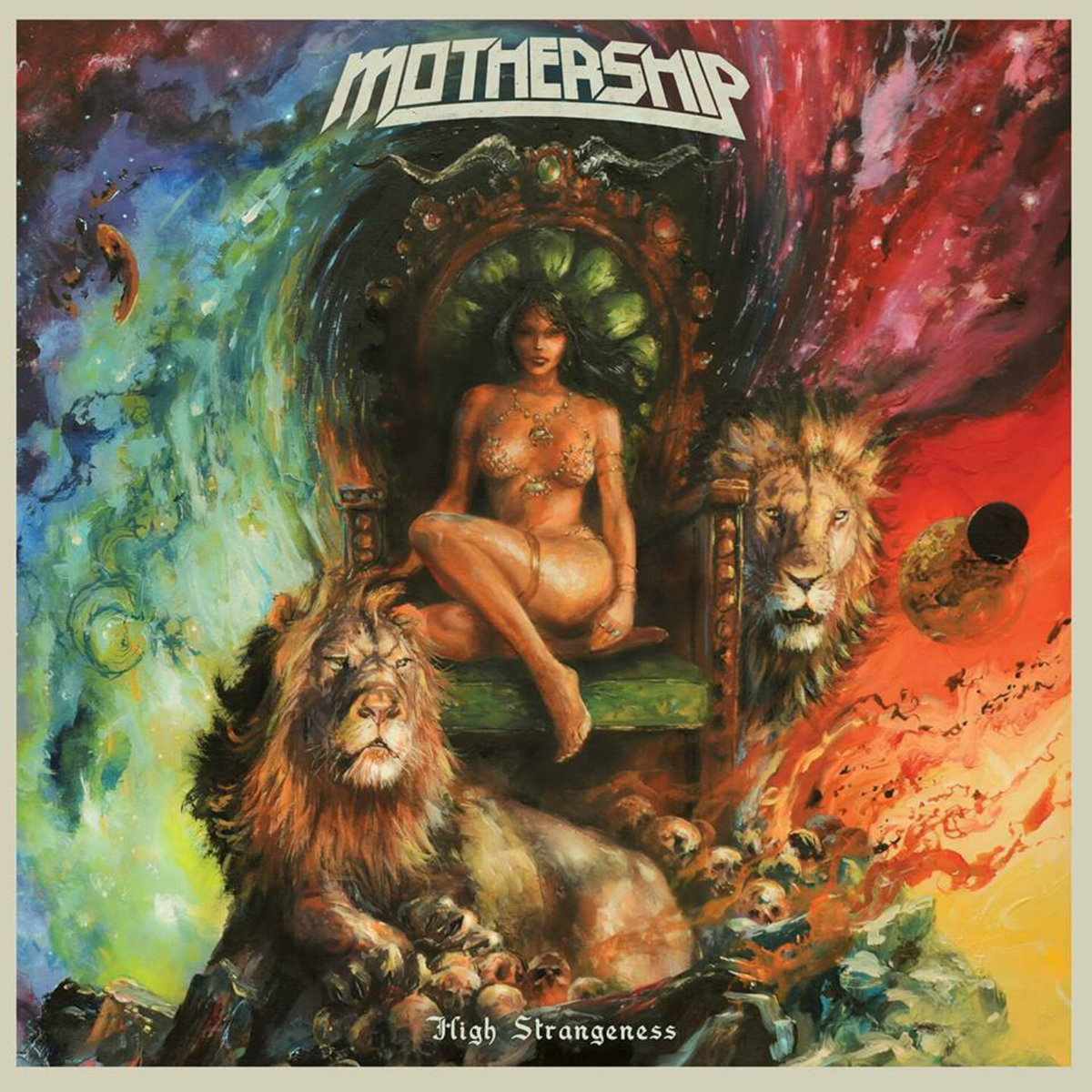 Born Feb 12 2010, Dallas Texas, Consisting of brothers Kyle Juett on bass/lead vocals, Kelley Juett on guitar/vocals, and Judge Smith on drums, these guys have a unique sound that demonstrates that Mothership’s goal from the beginning has been to carry on the tradition of classic rock stylings of the ’70′s, updated and re-calibrated and amped up for the modern day fan of thick lumbering tone maxed out with all the distortion there is to be found.

Eight tracks make up this 33+ minute offering and this represents the third studio album of four releases (based on what I could track down) and in my opinion is the most solid outing from the Juett brothers and Judge Smith together, showing a musicianship that comes from lots of time playing together to become the cohesive unit that MOTHERSHIP shows themselves to be with this outing.

Opener and title track ‘High Strangeness’ is a nice slower even-keel instrumental that will suit the biggest stoner-fan with all of the elements in place to take you back in time to the days of MAHOGANY RUSH with the spaced out guitar solos that fly in and out over the even bass line that carries the melody of this track all the way to the left/right bouncing of some faraway sounding signal that slowly fades out. ‘Ride The Sun’ follows with a faster tempo than the previous and again, shows that virtuoso type of riff that dominated the underground rock world of later 70’s bands including the tone of the likes of UFO and MAX WEBSTER and THE GODZ with the stop/start soloing and phrasing and does not relent during the entire 4 minutes. ‘Midnight Express’ wastes no time with a double-measure drum intro before the brothers kick it in together with a heaviness to the tone that will hit you between the eyes and Judge does his all to be right out in front, hitting his drums as hard as it sounds, and then the last minute of, the pace almost doubles and there is no hesitation to run along with.

‘Crown Of Lies’ has a pace that could almost be a tip of the hat to HEART’s anthem ‘Barracuda’ w/ the double palm-muted gallop picking and is one of the stronger lyrical tracks on this album and is filled with more twists rhythmically than any other track contained, invoking the 70’s gods of jam-bands as the multi-layered solo’s sear your brain with the fury of each note. ‘Helter Skelter’ is NOT a BEATLES cover but instead sounds more like THE HUNT meets DIAMOND HEAD in pace and progressions and tells Mothership’s tale of their own dealings that garnered this moniker. ‘Eternal Trip’ is a pure guitar piece that allows Kelley to shine in his own spotlight with a piece that is hauntingly beautiful in its saturated state of reverb with a clear guitar tone that you can feel rolling across your tongue as you take it in.

Standout track on this one for me, oddly enough, is the last song ‘Speed Dealer’ and for the first couple of measures, I felt the need to crank it up to ’11’ for the full impact of this juggernaut of heavy riffs and wash cymbal and was happy as fuck that I did with the power that screamed from the 14’s that were jumping to the quick fade.

They are indeed touring this one RIGHT NOW and it would be in your very best interest to support these guys in the LIVE format for the effect I just got from my measly speakers.  Get the album and catch ’em when they show up in your town!!