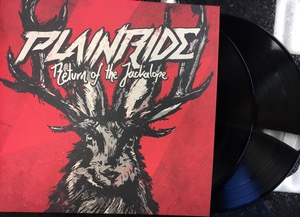 Return of the Jackalope

If you think you may have heard of this release before, well, it’s because you have… BUT there is a double-vinyl release slated for February 2017 of this opus including one side of four that is exclusive bonus material!! If the weight of this release (nearly one pound) doesn’t hit you, the music within certainly will.

Using their self-described recipe of ‘Earth rockin’ drums’, ‘beard growth inducing bass’, ‘fuzzomental guitars’ and the ‘roar of a wolfman’ and a whole lotta beer to hammer out each of these songs into the forms offered here, Plainride classify themselves as ‘Kick-ass stoner rock and roll’ and state that this is something to ‘shake the Earth like a ravaging hurricane filling skies with thundering riffs’ as they push through what many consider to be one of the finest genres to rise from the ashes of the 70’s.

Opening up with “Challenger ’69” there is no doubt this ride is going to be one to remember. One of the shorter tracks here, it is indeed the perfect set-up of what’s to come with the rest of the 13 total songs. “Salt River” is next, starts out with just guitar for two measures, then bass drum for another two, standard back in the 70’s but when you hear “Killed my father with a shovel and a shotgun…” you know it’s about to get deep. That ‘growl of a werewolf’ is a pretty apt description and it suits this band perfectly with tales of such as this. “(The Tale Of) Private John Colter” offers some insight into how the Jackalope entered the fray… less than two minutes long, we are given the back-story of and told that “No body was ever found” leading perfectly into the title track. The chorus belies this tale with the words “Roll on by me, don’t ya roll so slow, use your guns and watch me go”, seemingly speaking from the Jackalope’s perspective. One of the standouts on this is “(The Beards Upon) Mt. Rushmore”. FULL of fuzzy guitar tone and solo’s with a rock-solid rhythm section rolling along, you can’t help but to move and groove along to the end. “The Grailknights” follows this formula taking over your mind as you trudge along keeping pace with these guys, wanting to devour it all. “Beermachine” shows the fuel behind the fire as Plainride describes a major component of who they are, with this pace set to incite your thirst and have you drinking deep to slake the thirst that is now consuming. “Devil At Your Heels” comes out of the gate at full force before slowing to a tempo that pulls you forward into this tale of the ‘very influential’ that seems looming. “Warpdrive” is the last track, but not one that you will leave behind. More than likely, you will want to ‘spark up’ for this 15 minute tune and enjoy the ride as it courses you along.

A ‘must-have’ for 2017 and this repackaging is the pinnacle especially considering the gram weight and will seem like a whole new record with the extra’s and clarity that only vinyl can deliver.   I look forward to what Plainride next sonic release as they have raised a very high bar with this epic Debut.  Kudos to Ripple Music for putting this album on must needed Wax!