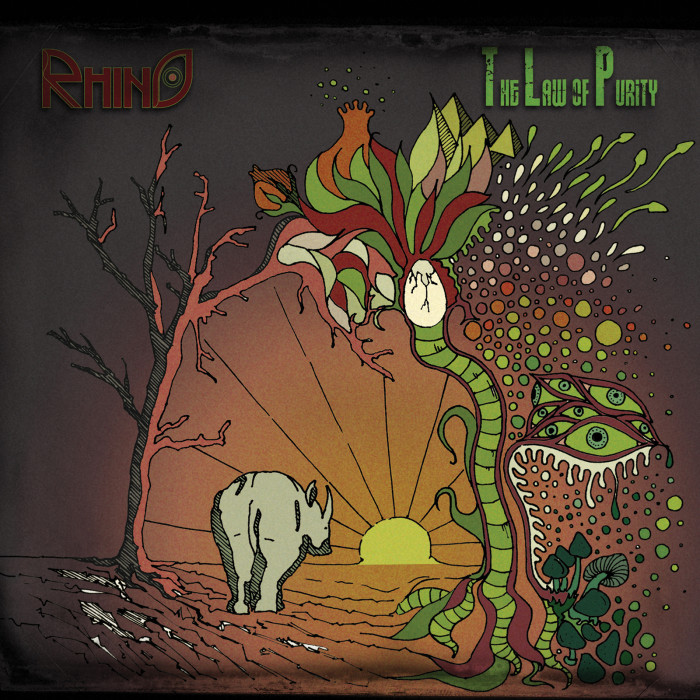 Catania, Italy is home to this five-man doom/stoner metal machine who’s latest release “The Law Of Purity” is set to be unleashed this February worldwide; let me help get you ready for this one…

Starting out in 2012 when Frank The Door (Marco-bass) and Red Frank (Seby-rhythm guitar) shared a passion for stoner-rock citing bands like BLACK SABBATH and KYUSS as favorites and influences. Lord J. Frank (Alfredo-drums) and Frank Sinutre (Francesco-lead guitar/vocals) completed the line up with that familiar recipe of old style whiskey, enough bass-fuzz to pull the hair off of your cat, quick shifting tempos and the aggro-gruff vocals that all lend to their psych-stoner spirited compositions. RHINO did their time playing biker festivals and the club/bar circuits tallying up a fan-base that pushed them along, allowing them to hone their craft to a razor sharp level. When asked to describe themselves, the response was “You in the desert, dust in your eyes and lovely mirages.” You could almost hear the Bongwater bubbling with that answer. Releasing their first 4-track EP in 2013, they kept hammering away and in late 2015 based in what I could glean, they cemented the five piece arrangement with the departure of Frank Sinutre, replacing him with Frank Real Tube (Luca-lead guitar) and Frank The Doc (Niko-lead vocal). The end result is PURE Sicilian stoner/hard rock as this release will demonstrate.

Lead-off single and title track ‘Law Of Purity’ begins with a pulsing back noise littered with birdsong that suddenly become the sound of tape running backward, high-speed until the guitar line begins, complete with muted cymbal tapping and then 30 seconds in, the rest of the band kick in as Niko’s voice rips your eardrums open with his growling delivery. Proving their might from the onset, it is obvious that RHINO is ready to dominate as the track rolls through with their signature pounding fuzzed out bass, time-shifts from hell and guitars working in perfect tandem letting the tale of this “New Messiah” unfold. The same guitar tone takes you into ‘Bursting Out’ as seamlessly as sugar folding into coffee, leveling out into a slow gallop as Niko starts out, “Sometimes, I feel…” leading you along this tale of “something hidden”, wondering what lies behind the “sleepless”…

‘Grey’ opens with two measures of measured snare and cymbal before the spaced out guitars take your arm and push you along this faster paced tempo taking you over through the twists and turns of time-shifts and bass runs quick enough to get you dizzy before the psych-solo rips into your brain at the midpoint, cascading through your bloodstream until Niko’s voice comes back, relaying the remainder of this tale to your waiting brain until it fades to silence.

‘Nuclear Space’ starts out with this funky bass line that goes on for about two and a half measures until the rest of the band comes in full-force, distortion boxes screaming all around. Fulfilling the need to give their take on what lies behind our very own atmosphere, this track is like the proverbial train dragging you along until the track just stops cold. Enter immediately ‘Eat My Dust’, a slower romp as unrelenting as ever in all it’s distorted majesty, VERY reminiscent of WARRIOR SOUL in it’s ‘simplistic-complexity’ of spinning guitar lines with a KORY CLARKE like vocal-delivery that has you grabbing to savor each syllable being belted out. ‘Nine Months’/’A & B Brown’ and ‘Cock Of Dog’ could easily be a 15 minute ‘jam piece’ for their live set as all run so smoothly together, one after the other as if they were intended to be a three piece opus.

For whatever reason, it seems to be a tendency for the last track of most stoner bands to be the perfect book-end and a precursor of what looms next and RHINO seems to be no exception here. ‘I See Monsters’ has so many elements mixed together saluting their aforementioned influences in power and might with the SABBATH-style window rattling thickness of guitar/bass and that MONOLITH vocal sneer describing the “monsters in your mind.” 48 minutes later, I had to pick my jaw up to close my mouth in my astonishment and appreciation for what I had just took in and if you know what is good for YOU, you will grab this one the second it is released!!