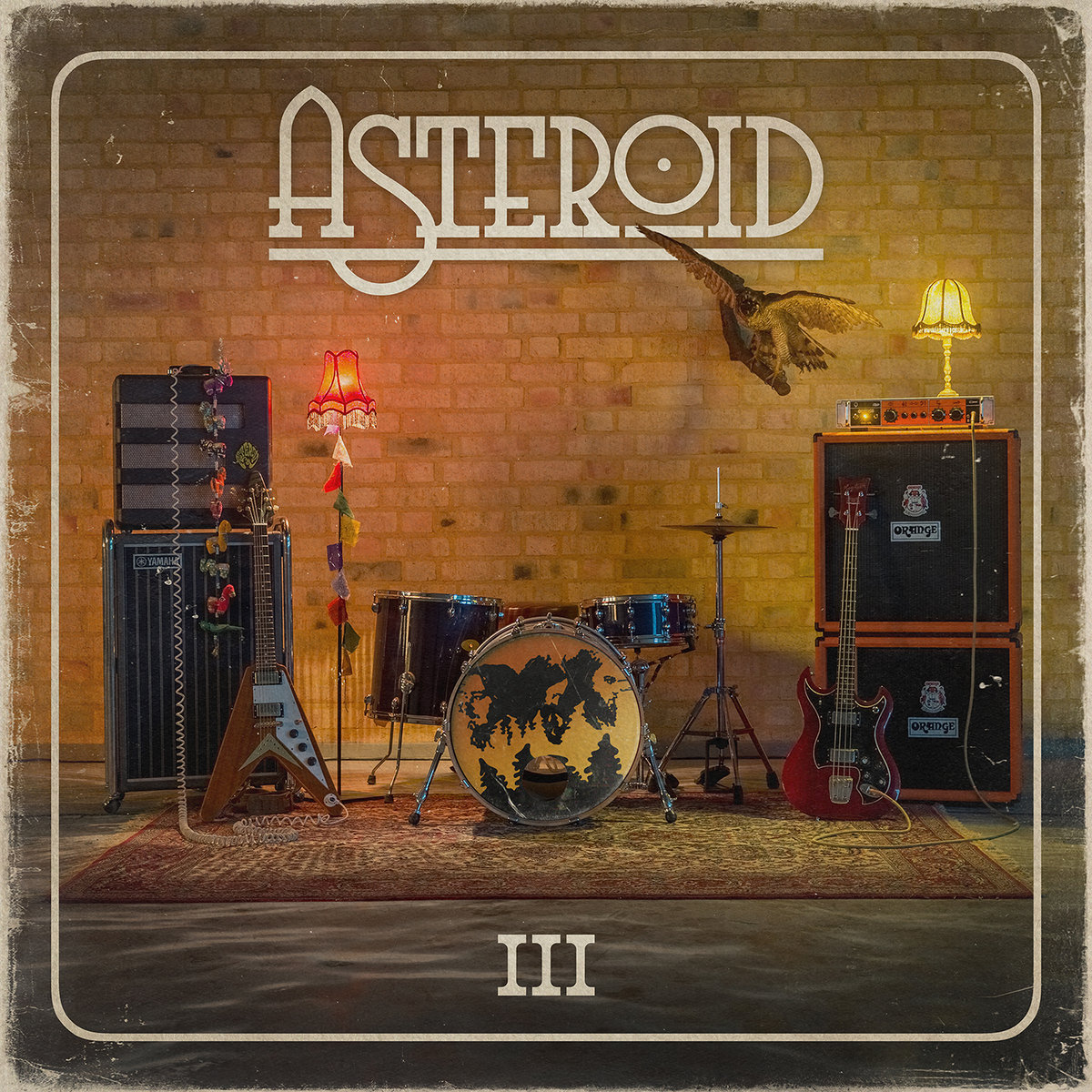 Asteroid’s appropriately titled third album, III, is pretty badass.  It’s been awhile since these Swedes put out an album, six years to be exact.  Hey that’s cool. They’ve matured, like a finely aged cheese, and so has their sound.  They don’t actually sound all that cheesy, unless you’re burned out on the whole retro psych thang.  I for one welcome our new aging stoner overlords.

There’s a lot of things to like about this record.  Firstly, for me, it’s definitely a breath of fresh air.  Despite the fact that it’s being released by Fuzzorama Records, it’s not an outright fuzz-fest.  Sure, it’s got those warm and fuzzy moments, but there’s also a lot of cleanliness (which is supposedly next to godliness) and texture going on throughout. It’s thoughtful and dynamic. Secondly, it explores many of the influences that are acknowledged by many stoner and psych bands, but they’re kind of fringe elements.  You’re not going to hear a lot of Kyuss worship on this one, and I’m cosmically kosher with that, because it’s 2016 and Kyuss worship is more played out than our current election cycle.

Let’s take the opener, “Pale Moon”, for starters.  It’s my obvious jumping off point because it’s the lead track, though my real point is that it’s a total Pink Floyd homage, with a thumping, trance-inducing bass line and watery slide guitar reminiscent of Gilmore’s finer moments.  Asteroid aren’t reinventing the wheel by any means – this is basically a toned down take on the Floyd classic, “One Of These Days” with some soulful singing at the end.  Similarly, the second track, “Last Days”, reminds me a bit of Uriah Heep, a band that most retro aficionados will frequently name check though rarely emulate.  If you’re legit into the Heep, I’m into you, dig??  They start to throw in some faintly fuzzy, vaguely doom-ish riffs on this one, so I feel like they’re hitting a bit to all fields.  The lyrics also take a turn towards the dark and morbid, which is sure to please more metallic minded devotees.

This is a short album, it’s 7 songs in 36 minutes, so let’s just go track by track, shall we??  “Til Dawn” reminds me a bit of their fellow Swedish rockers, Graveyard.  It’s a bit more of an upbeat and straightforward song, which totally works after the previous two tracks.  It strikes a nice balance.  Next we’re treated to “Wolf And Snake”, which isn’t just a catchy title.  There’s a brilliant initial interplay between the ringing clean chords and the increasingly crunchy Wino inspired riffs.  From there, the tempo picks up, and Asteroid launch into full fuzz mode with one of those licks that makes me think, “wait…. didn’t I hear this exact riff come out of Sweden 15 years ago???”  Yet they can get away with that generic part in my book, because it’s the exception, not the rule.  At this point in their career, Asteroid are far from a one riff wonder, so it shouldn’t come as any surprise that they bring the tempo way down and doom-y before ending with quiet, melancholy guitars.

“Silver And Gold” is a slow burning ballad dedicated to Lucifer, Patron Saint Of All Things Heavy.  Eh, a bit cliché, for sure, and I’m going to digress for a bit.  No one seems to realize that equating the name “Lucifer” with the devil isn’t an accurate analogy.  The term means “Lightbringer”, as most of you probably know.  So how is The Devil, The Prince of Darkness also the proverbial “Lightbringer”???  He’s not, people!  The word “Lucifer” is used twice in The Bible – once to refer to Venus, The Morning Star, which was used as a metaphor for the Babylonian king Nebuchadnezzar.  In the second instance, the moniker “Lucifer” is used to refer to the savior Jesus Christ, “The Lightbringer.”  This obviously makes more sense when you actually stop to think about it.

We have the illustrious Saint Augustine to blame for this debacle.  Augustine wasn’t always super with it, perhaps because he was a booze guzzling hedonist before God Almighty began having close, personal conversations with him. He wasn’t able to grasp the subtlety of the phrase “Lucifer, how far thou art fallen” in relation to Venus and Nebuchadnezzar, and thus thought “Fallen???  Must be Satan!!!” Somehow that stuck with early Christians, because Augustine was some big time saint and therefore regarded as a wise dude and hip to these mythological musings. As usual, I’m digressing, though all of you budding Satanists should really read Satan: A Biography, by Henry Ansgar Kelly before you start writing lyrics about The Devil or one of his dubious monikers.  And I know what some of you are thinking, “Don’t you write lyrics about Lucifer, Andy??”  Yes, I do, though I clearly understand both the cliché and the cognitive dissonance involved in such an undertaking.  Also, I routinely have alcohol induced interactions with all forms of entities, Augustine be damned.  When God talks to me, he says definitely don’t drink domestic, so who is the fucking wise one now??

Lastly and most relevantly, let’s face it – many of you are total suckers for this kind of pseudo-Satanic bullshit, so I like to throw it out there in various forms because people eat it up despite their lack of context.  In our next review, perhaps I’ll manage to tie in how Ronnie James Dio, despite all of his obvious accomplishments as a vocalist, did not actually invent “throwing the horns”, and what those actual origins, meaning, and symbolism are.  These little tidbits of esoteric knowledge are always a fun topic at parties, and the main reason why I will always have a date every Friday night who will most likely find me obnoxious well before midnight arrives and I turn into a pumpkin.  Or a gremlin.  Or something to that effect.  It doesn’t matter anymore. This review has now officially gone totally off the rails.  I’m okay with that, but let’s reign it back in, shall we??

The next song, “Them Calling”, once again intertwines blown out fuzz with clean, trippy tones, though this time around there’s more of a tense intimacy.  These transitions are both more adept and abrupt, illustrating a striking disparity and a heated reconciliation.  It’s like the sonic equivalent of make up sex, when the couple just aren’t sure if frustrated love or repressed hatred are the current predominant emotions they’re expressing through their lustful act of carnal knowledge.  Do I mean coitus?  Yes, I like it too, Mr. Lebowski.    The pace picks up into a bluesy groove, culminating in a catchy yet creepy chorus.  The final track, “Mr. Strange” starts up with a rolling drum beat, and slowly adds layers of increasingly harmonic guitars before stripping things down for the soulful vocals to take the lead during the soaring verses.  When the main riff returns, it’s accompanied by a layer of haunting vocal chants.  This is my favorite vocal performance of the album.  The song really illustrates one of the things that Asteroid pull off so well on this album – they never let anything get old or stale, there’s this constant sense of theme and variation that’s reflected in both the crafty arrangements and the constantly shifting tonalities.

I don’t often give glowing endorsements, and I’m trying not to make an exception, because this isn’t going to be for everyone.  It’s not the heaviest thing ever, that’s not what they’re going for so you’re not going to find it here.  And despite their evident mastery of the style and the fresh air they breathe into it, this is still “stoner rock”, complete with all its limitations.  Like I mentioned earlier, they’re not treading any new ground, rather they’re retracing the footsteps of past masters, so if you’re looking for the next big innovative, forward thinking rock album, look elsewhere.  If you are looking for a cool collection of seven songs that drift through various retro psych stylings with ease and grace, then hop on the Asteroid express folks…. it’s one helluva ride.

*Andy Beresky’s favorite comic is the “Lucifer” series, which he reads religiously.