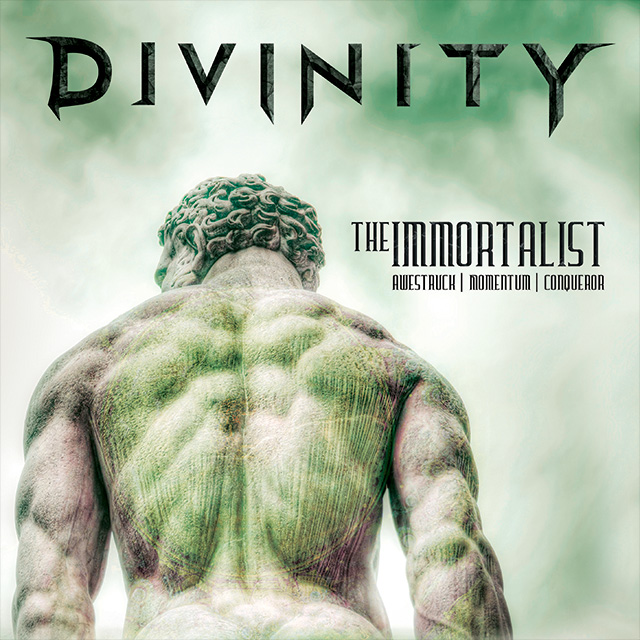 I’ll be honest, when I read that a band is getting musical comparisons to acts like Soilwork and Extol then that will be plenty enough to convince me to at least check them out. The Calgary, AB progressive death metal band Divinity are getting those types of comparisons out in the music world and deservedly so. If I could add one of my own to the list it would be Strapping Young Lad and not because of the Canuck connection but because Divinity genuinely display some very SYL-ish moments in their music. Having never heard Divinity until recently, I was not fully prepared for the great musical content of their latest recorded offering, ‘The Immortalist‘, nor did I know the story of the music either.

See, The Immortalist (which will be released this Friday, May 26th) is the culmination of five long years of hard work and determination from Divinity. The album features 12 tracks that include their two previous EP releases “The Immortalist, Pt. 1 – Awestruck” and “The Immortalist, Pt. 2 –Momentum” with their 3rd EP “The Immortalist Pt. 3 – Conqueror” now completed to finish off the trilogy series as one huge full length album. All the tracks on the album are re-mixed and re-mastered by the talented Chris Donaldson (Cryptopsy, The Grid Productions) to make the songs more cohesive and work as a full-length experience. Plus, the song ‘D.M.T.‘ features a guest appearance from Soilwork/Night Flight Orchestra’s Bjorn ‘Speed‘ Strid.

The band commented on their upcoming effort saying: “We’re very proud of our new album! Our dedication to song writing, recording and producing these 12 songs over the past 5 years has been a crazy musical journey and a huge learning experience that we will never forget. Our lyrical content and artwork is based on an original science-fiction concept story about a character who wakes up in a random field within an intricate crop circle with no memory of who he is or how he got there. The character is then thrown into a crazy adventure and eventually learns who he is and how to become immortal. There’s so much more to the story but we don’t want to give it all way just yet.”

Today, Taste Nation LLC is giving you the opportunity to stream Divinity‘s ‘The Imortalist‘ in its entirety below. Pre-order of the album is available on Divinity.ca, iTunes or Amazon plus an exclusive digi-pak CD available on their website for those who like to support the band directly. The digi-pak CD contains a 24-page booklet that showcases this entire concept giving fans way a full physical experience to the story, songs, lyrics, and visual aspect of the new album. Enjoy!