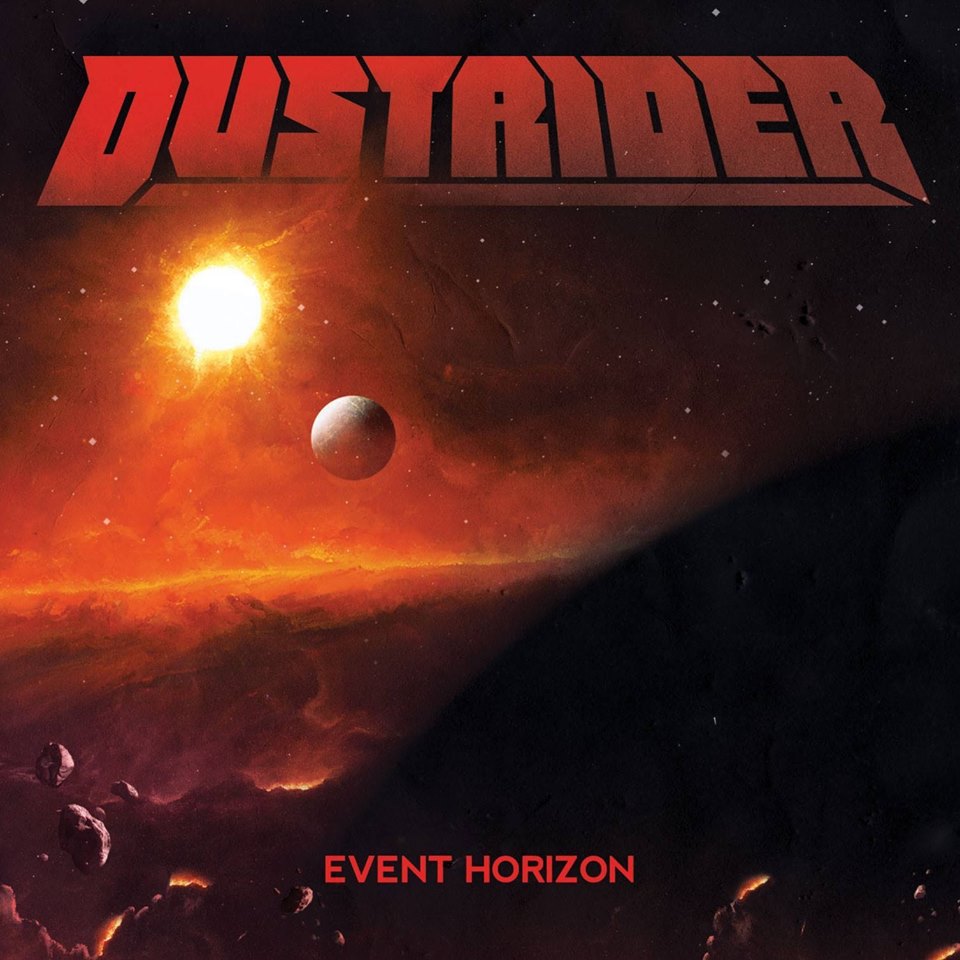 The next event horizon, from Italy’s mighty Argonauta Records, is Dustrider’s debut full length, titled just that…”Event Horizon.” A very fitting title to this tripped and stoned out fuzz fest into the ether of outer space. An instrumental band formed in Rome in early 2015, Dustrider released the self produced EP entitled, ‘Mother Engine.’ In steps Argonauta Records.  Dustrider and Argonauta both hail from Italy, so its definitely a match made in hell. In my humble opinion,  Gero and the crew at Argonauta have a finger on the pulse of the cutting edge of heavy music…and this release by Dustrider is no different. The band consists of Bruno ‘BrÜno’ Bellisario on guitar, bassist Andrea ‘Keoma’ Romano, and Francesco ‘Krundaal’ Romano on drums.  A few fat spliffs, a couple grams of shrooms, and the baddest dune buggy you’ve ever laid eyes on.  These are the tools you’ll need for “Event Horizon!”

As ‘Warped’ starts the record, you get in your kick ass buggy and turn the key. The song starts with a thunderous rhythm and bass heavy intro as you rev the motor of this beast. Drop it into drive as you feel the “tools” kick in…and you’re off with wheels kicking up the desert sand. Riffs and groove, manifest as you raise a middle finger in the air. As you light the first spliff Dustrider takes off into a heavy psyche wonderland. Weaving and twisting in bliss. As the song ends with feedback of fuzzy distortion,  I cant wait to see where the rest of our spaced out journey goes.

Second track ‘Cosmo’ kicks in with a classic rock intro, then boom we’re off again with spliff in hand. Racing across a floor of desert riffage. This band needs no vocals, the music itself tells a story and takes you away into your imagination. It’s a thrilling ride so far.

‘They Live!’ is the fuzziest so far. A straightforward stoner jam with a glorious and colorful psychedelic solo. The double bass lick at the end is sick! Wait for it. The drum sound on the record as a whole is great. It’s raw but refined. Sounds like real drums. Played by a real good drummer. I dig that.

‘Fallout Criminal’ follows and is an exercise in Fu Manchu. ‘Nuff said.

The next three songs, ‘Agartha,’ ‘Stratosphere,’ and the title track ‘Event Horizon’ are standout tracks that take our badass dune buggy up in to space. We’re floating, we’re flying, and we’re not denying that the mushrooms are taking over.

These songs turn and soar, they bring heavy and can destroy. Tracers of shooting stars are so close, almost touchable as they shoot away with the riffs. Then they let us gently down. We breathe as we ready ourselves for the conclusion of our heavily psyched out stoner trip across the universe. From the desert floor to the galaxies.

The closing tracks to the album ‘Ultima IV’ and ‘Dust Devil’ end Event Horizon perfectly. They are exhilarating and celebratory. Dustrider makes you reminisce on the adventure, and make you wanna get on this dune buggy spaceship and do it all over again…and again…and again.

Dustrider have focus yet flexibility on ‘Event Horizon’ they know when to hold on and they also know when to let go. I for one love instrumental bands and this three piece know how to do it to perfection. They make you hear in colors and in dialogue by the notes, and the complete songs they play. They tell a story, but let you write the script. Your mind is the canvas and Dustrider paints it. ‘Event Horizon’ is an amazing record. I don’t know about ya’ll but I’m getting back in the dune buggy to take another trip with Dustrider and you should too!!