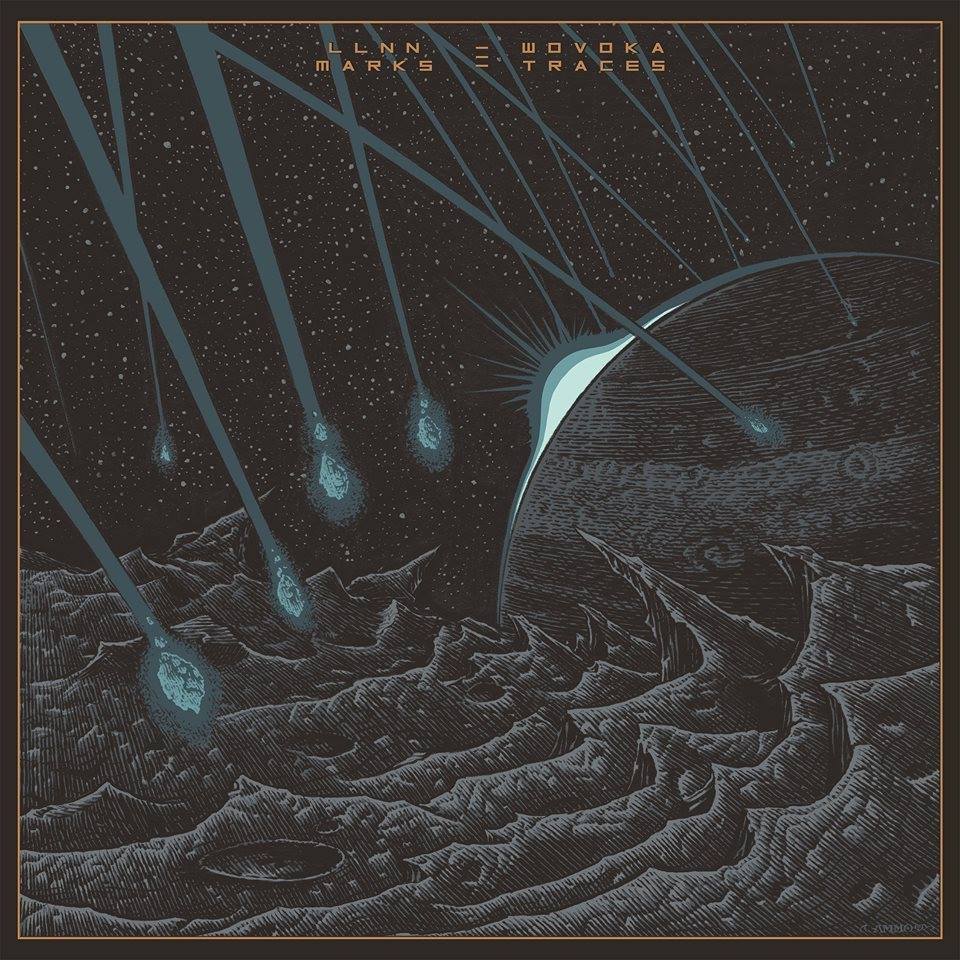 LLNN’s and WOVOK’s Marks/Traces split will see release June 16th via Pelagic Records on CD, LP, and digital formats. It remains to be seen if the planet’s fans of atmospherically dense, crushing doom heaviness are able to withstand this bleakly oppressive effort. The seven song Split sees Copenhagen, Denmark’s LLNN contributing six of those selections while Los Angeles, California’s WOVOKA add one rather lengthy number themselves. But it is the results that matter here I suppose and in this case, those are impressive…perhaps depressive too for some but either way, this is textural doom in all of it’s glorious greatness.

The beginning of the Split does so with the superb LLNN track ‘The Guardian‘, a melding of post-hardcore and noise rock with obvious doom and metallic overtones. The track’s rhythmic, pattern-like pulses act like a slow-grooving juggernaut rendering all before it asunder. Tribal drumming and intermittent walls of sound host the acidic vocalizations that permeate the song. Subsequent cuts like ‘Swarms’ and the blast furnace ferociousness of ‘Engineer Of Ire‘ only drag you further downward into the mire of this sludgened bog. The stand-out content provided by LLNN definitely is delivered in the back-to-backs tracks ‘Nostromo Falls‘, ‘Eye Of The Covenant‘ and ‘Gravitated‘. The latter one an instrumental delivering a slow deluge of electronica, rumbling undercurrents of bottom-end heaviness and shadowy, eerie vibes altogether. There are haunting vocal chants that remain ethereal and quite ghostly as well.

‘Traces‘ is WOVOKA‘s one lone, long-playing selections at over seventeen minutes playing time. After a brief intro piece, a barrage of molasses-molded riffs, skull crushing rhythms and drums driven by what sounds like axehandle-hewn strikes arrive. Hellish, anguished vocals cascade from within the cacophony, flowing across turbulent tempos and resting harshly upon your soul. Everything feels as if it is gradually increasing, building ever so subtly like a slow rising tide that will eventually overcome you..and it does. Aggressive transmittances ebb and flow, rise and crash within this swirl of tidal tonality until a break point is reached. From it, things settle into a less chaotic state as some massive bass lines and tightly wound drums take the reigns. Eventually they are accompanied by some intriguing, emotionally-enhanced clean vocals as the cut takes on a more definitive alternative, almost showgaze-y styling of post-rock content.

The pairing of these two bands on this Split from Pelagic Records is an ideally intelligent move. Both LLNN and WOVOKA work well in complimenting each others’ contribution. While there’s currently just a track from each band above (a press promo copy of the album was used for this review), it is more than enough for you to fathom exactly what we are dealing with here. ‘Marks/Traces‘ is a volatile offering that is simultaneously dangerous and daring for all the parties involved..them, you, me, us..everyone. See all ordering links below.

For Fans Of: Cult Of Luna, Neurosis, ISIS, Amenra