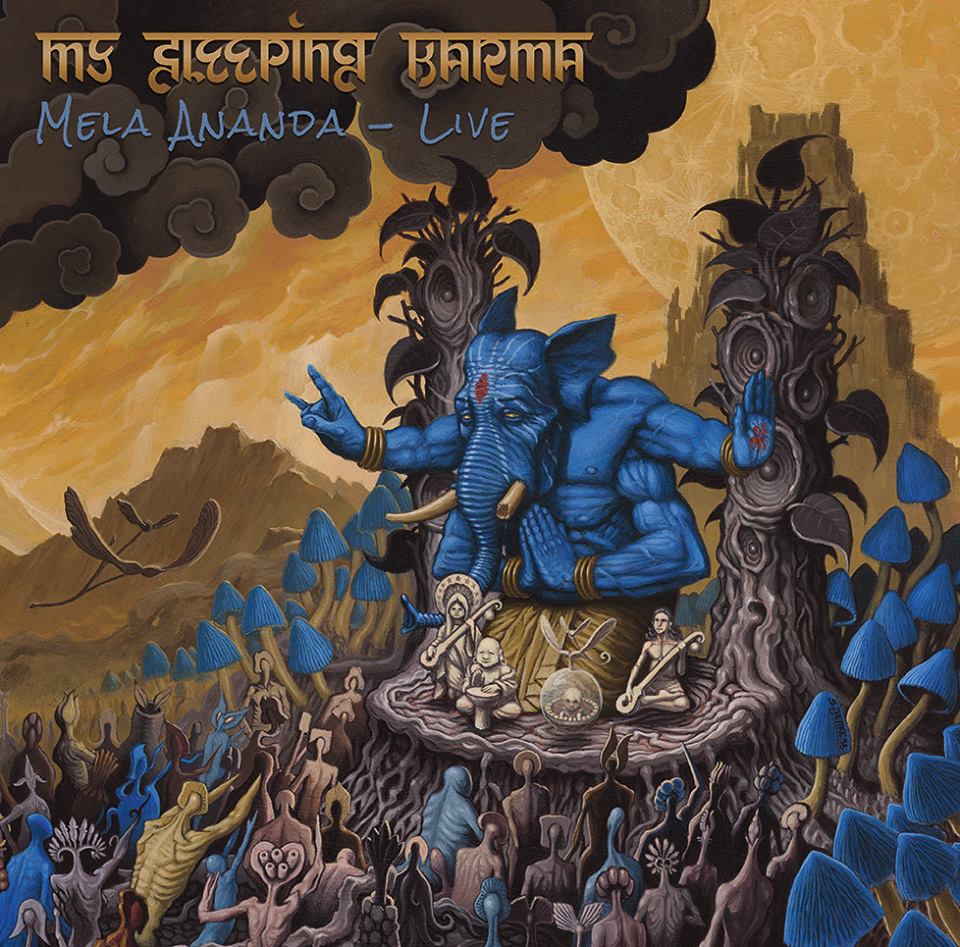 Aschaffenburg, Germany is home to the four men that make up MY SLEEPING KARMA. The town is located in the southwest part of Germany, 41 kilometers (25 mi) southeast of Frankfurt, Aschaffenburg lies in the far northwest of the state of Bavaria. This is referenced only to give you an idea of where they hail from and give some perspective into these master musicians that proclaim they are “Not beginners or amateurs and when they take the stage, you will forget everything around you as they take you by the hand into the deepest, hidden corners of your soul” enquote. Tough to imagine from a band that has potato chips showing as the band interest and list SLAYER as another band they love…

Five studio albums later, beginning in 2006, sporting two singles and an appearance on Napalm Record’s Christmas compilation, MY SLEEPING KARMA has put together a ‘Greatest Hits’ of sorts ranging from the first self-titled 6-track record all the way through to 2015’s release “Moksha” and the result – “Mela Ananda Live,” is simply stellar!!  Classifying their musical style as a conglomeration of Psychedelic / Stoner / Instrumental / Space / Progressive Rock, it is awe-inspiring how they move between lush almost-jazz tempered cool into near metal-thundering riffs ripping through you, never dropping a beat throughout this 68-minute beast, traversing of what can best be described as inner catacombs.  Each track exposing its own light across the shifting shadows of drums / bass / keyboards and guitar, keeping your attention as you hear every word that is never spoken by the voices of this quartet, each voice offering its own color.  I barely noticed the audience between songs with the flow of the performance being as smooth as tempered glass.

Each of the ten tracks included would have been the ones I would have selected from their extensive library if I had been asked to design the set-list, personal favorite ‘Psilocybe’ especially and the running order lends to that smooth-as-glass tempering making this offering almost as good as being there yourself!!  Great introduction to a veteran band that seems to tour nonstop as their schedule for March 2017 they have posted shows; every day booked from 3-16 to 4-1-17. If you get the chance, go and reward yourself to this near-transcendental experience offered to you. If you cannot, immediately add this album to your library and enjoy the inner-ride. As they further state, “My Sleeping Karma offers the perfect movie soundtrack to everybody’s own inner journey. Just be warned, you may never want to leave again!!” enquote. Nothing better than ‘truth in advertising’ and this record is exactly that. OUTSTANDING accomplishment!!