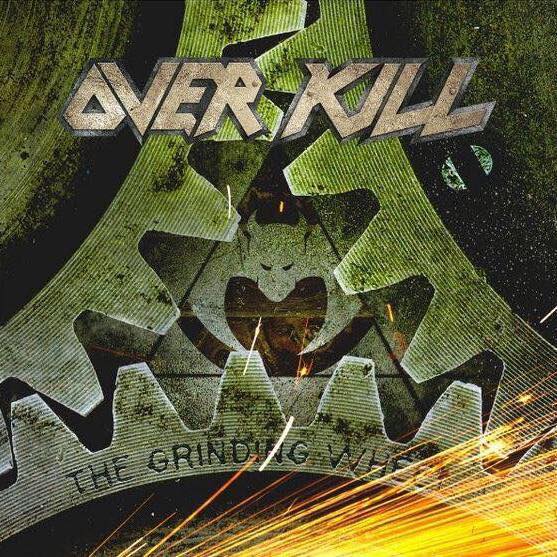 You can count on three things in life: Death, Taxes, and if you haven’t guessed already, OverKill. From 1983’s “Power In Black” demo right up until this very minute, no thrash band, and I mean not a one, has been as consistent and true to their roots as the NJ outfit has. They are just incapable of making a truly bad record. Now, even though the band is largely uncompromising, that by no means indicates they’re standing still. They had the classic Megaforce /Atlantic Records era, filled with youthful, fire-breathing slammers, the decade plus middle run that incorporated chug and groove into the mix, and finally, the 2010-to-now stint, returning to the full-on fury of the early days.

So, what I guess I’m trying to get at here is this- “The Grinding Wheel” finds the Kill boys running on a full head of steam.  They are just as defiant and angry as they’ve ever been. The whole affair starts off with a bang, as ‘Mean, Green, Killing Machine’ builds from a rhythm section intro straight into neck-snapping velocity, then all gets nicely rounded out with some Sabbathy doom groove. ‘Our Finest Hour’ is a gut punch with plenty of the micro-second stops and swing the band has nearly patented. The ever-so-slightly slowed up ‘Come Heavy’ shows a darker, moodier side to the proceedings, but still can’t resist the urge to mash the pedal down at key intervals. These three tracks really represent the rest of the album well; the other seven tunes blend these highlighted facets just as sweetly. If you grab the limited edition, you’ll get an eleventh tune…A rousing cover of Thin Lizzy’s ‘Emerald’ to fatten things up.  Oh, just in case you are wondering, Blitz’s contemptuous snarl and lyrical cynicism are as potent as ever.

I love when the old guard shows the youngsters how it should be done, and “The Grinding Wheel” is ass-whoppin’ evidence to back such a perception. OverKill has been around as long as “The Big Four” and this record is proof-positive that sales or commercial popularity will never outshine integrity.

Words by David “The Lovely” LaMay