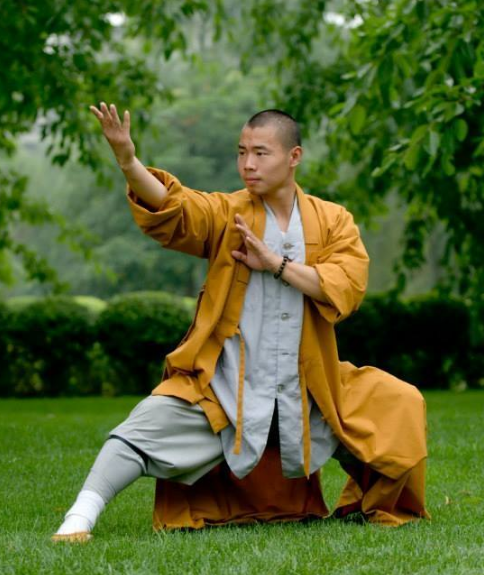 Master Shi Yanqing was born in Handan, China. He began practicing Chinese martial arts in the Shaolin Temple at the age of nine. He was elected to the Shaolin Kungfu Monk Corps, in which he became a devout disciple to a Shaolin monk. Under the mentoring of Abbot Shi Yongxing, he learned traditional Shaolin Kung Fu, Chan Wu culture, and the practice of Yi (medicine).

Shi Yanqing won multiple Boxing Champion titles in the national Shaolin boxing contest. In 1999, he was selected to carry out cultural exchanges among the world. In 2003, as one of the Shaolin Kung Fu Monk Corps members, he visited Korea and the Philippines and various other countries, and won first place at the Korean International Kung Fu Tournament. He also toured with Abbot Shi Yongxing to Australia, the United States, Italy, Thailand, Japan, Brazil, Bulgaria, Germany, Austria and many other countries for cultural exchanges.

He was appointed by Abbot Shi Yongxing to come to the United States to promote Shaolin Chan Wu culture. He is passionate about sharing his knowledge to help others gain strength and balance.

This class teaches you controlled breathing, stretching of the torso and limbs in order to strengthen tendons and ligaments throughout the body. Compared to YOGA, Master Yanqing brought Ancient Shaolin YIJIGJIN & XISUIJING into QI GONG. You will learn “STAND” BADUANJING, “SIT” BADUANJING, “SHIERDUANJIN” and others. It’s higher level of YOGA – SHAOLIN YOGA!

It will improve one’s general well-being and help balance one’s emotion. It will develop your inner peace and wisdom to enjoy daily life.