“Do you believe that someone out of the past – someone dead – can enter and take possession of a living being?” This is certainly an intriguing question asked by the character of Gavin in Alfred Hitchcock’s movie, Vertigo. When pertaining to Beastmaker, the answer is a wholehearted YES! Beastmaker seem possessed by early Black Sabbath and other similar vintage doom rock from the past. These Californians have invoked those spirits to produce, what is in my book, a top ten contender for 2017. 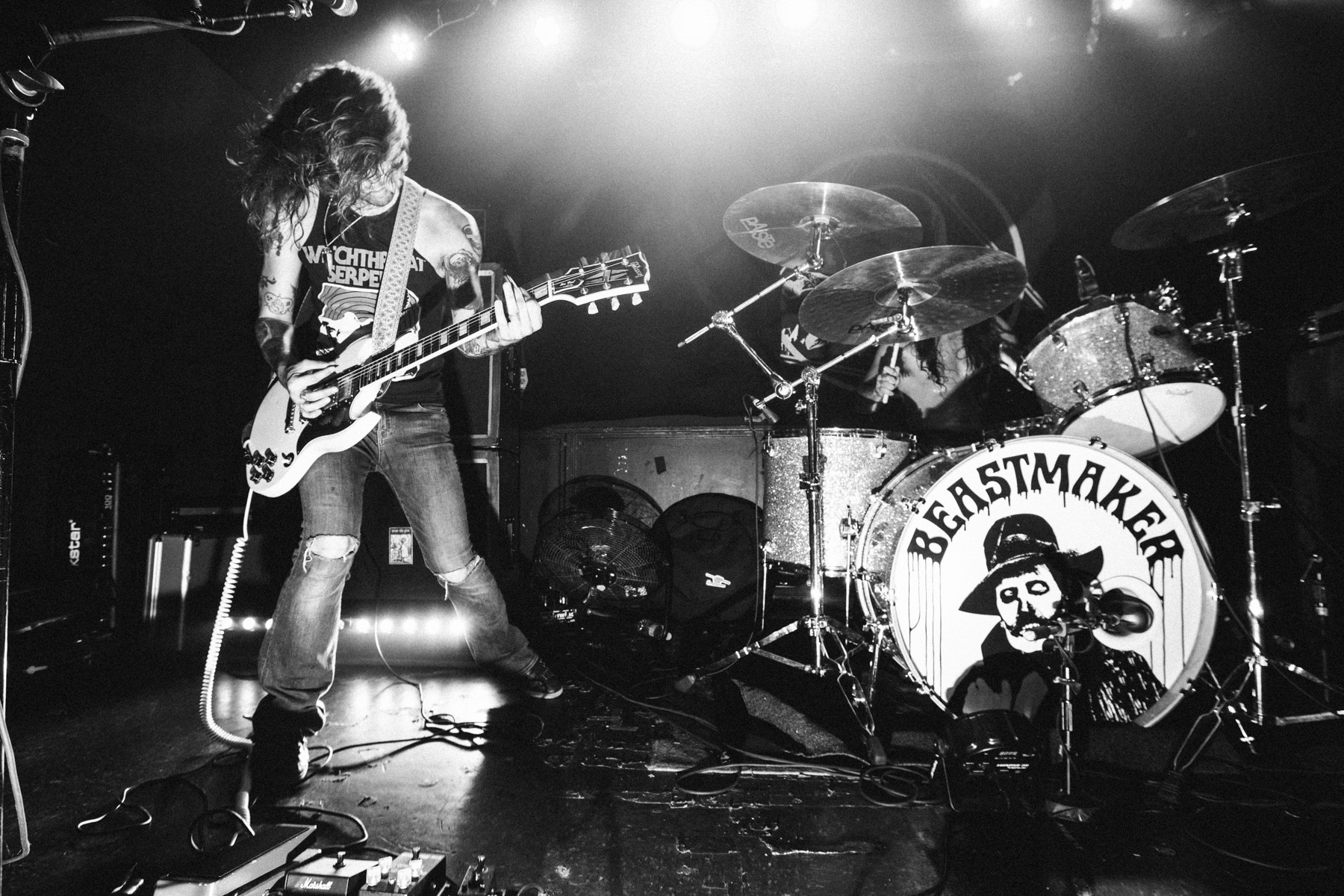 Beastmaker recorded Inside the Skull in three days. Andres Alejandro Saldate (drums) mixed and mastered while Trevor William Church (guitars/vocals) engineered. The band is rounded off by John Tucker (bass). Johanna Sadonis from Lucifer lends her unmistakable voice to “Heaven to Hell” and “Now Howls the Beast”. Knate from Salem’s Pot also makes a guest appearance. His contribution seamless given his track record with Salem’s Pot.

Church relates that the album was inspired by a myriad of topics. The base of the inspiration coming from horror movies such as Tomb of the Blind Dead. Thriller and suspense literature and movies such as the previously mentioned Vertigo by Hitchcock, and a distaste for organized religion were also cited as influences. The simple, yet effective, album cover was rendered by Branca Studios and perfectly conveys the contents therein. All ten tracks purveying a hauntingly doomy background to their style of old vintage metal.

Opening number “Evil One” initiates the proceedings with a wonderful doomy riff that drives the song along at a brisk pace. Album closer “Sick Sick Demon” bookending the album in much the same way. “Heaven to Hell” is a more varied track that ebbs and flows with its tempos. “Now Howls the Beast” and “Inside the Skull” feature some impressive solos. “Nature of the Damned” and “Psychic Visions” providing a mid-tempo that keeps things varied enough to create a dynamic album.

Beastmaker has created a memorable doom rock album with vintage overtones that does not disappoint. Inside the Skull is due to release on May 19th via Rise Above Records. Yes, Rise Above, so you pretty much know what is in store. It’s the perfect label for this band. They will be touring in May and June with Zakk Sabbath, so catch them live if you can. Now, in the words of the character Madeleine from Vertigo, “there is something I must do.” So, if you’ll excuse me, I think I’ll take another listen (or two) to this one.

Fresno, California’s occult doom trio Beastmaker will bring their macabre sonic arts to the music loving masses via their new album, ‘Inside The Skull‘, on May 19th. The Rise Above Records release promises to revive the halcyon days of proto-doom and early vintage rock. Today the artwork and track listing for the album have been revealed along with an official video, ‘Nature Of The Damned‘. Recorded and produced by the band themselves, in their own self-built studio, this promises to be an album of fundamental heaviness.

Once Inside The Skull is released, the band will be hitting the road in the US with Zakk Wylde‘s Black Sabbath tribute act, Zakk Sabbath. Tour dates can be found below.

“Nature Of The Damned” video: