“In Case You Missed It” Series – Episode 2

Spring 1991 found brothers Dan Hutchison (g/v) and Jeff Hutchison (d) forming the band and after gigging around trying to find the right line-up and they released a 4-track EP in 1995 on cassette, before disbanding. Fast forward 15 years to July 2010 wherein the brothers returned , ready to go with Charles Hoffman (b/v) in tow to round out the lineup and they headed into the studio soon after to record their first full length release “Autopia”.

Consisting of 10 tracks making up this 45 minute slab of prog-punk that the band tries to underplay, describing themselves as quote “a pathologically eclectic old-school punk sort of power trio, or alternately, just 3 more kinda yelly white dudes, if a little on the middle-aged side, and FETAL PIG’s music (and lyrics) are fun, sarcastic and paranoid, combining the ferocity of punk with the angular guitar dissonance of post-hardcore noise rock, and the compositional ambition of prog rock” enquote. What is actually delivered is a slab of attitude and angst reflecting all of the vocal tendencies of punk heavyweights like JELLO BIAFRA and The DEAD KENNEDYS, the time-shift madness of THE MINUTEMEN basslines hammered hard-enough to knock you down and drumlines that seem perfectly accentuated by the twisted guitar meanderings that surround these tracks with all of the precision and seeming madness.  There is no denying that these guys have their mission and this is it.

Tracks like ‘Meaningless’ / ‘Concerns’ / ‘Identity Crisis’ and ‘Inside The Pyramid’ all have that punk-ish edge and a vocal line screaming of rage, discordant misplacement and anger while not giving a fuck that comes with the territory of our post-hardcore world, where ‘Power Slide’ shows an even more aggro-fast side.

‘The Piano Movers’ opens with this ultra precise bass line that kicks in with the rest and takes you on this almost dizzying ride of stop/start/shift tempo that pulls you along with an urgency to take it all in for the just over two minutes of mastery of their craft, not like the “middle-aged, yelly” guys they portray themselves to be and this proves it, while ‘New Apostles’ is as fast and frenetic as could be with dual-vocals and all, screams intact as the guitar-bee zips and zigs and zags all around, showing that progressive flavored-post-punk tag is indeed suiting.

Two tracks in particular stand out to ME on this and those are opener ‘The Dawning Of Autopia’ and closer ‘FP Vs. Mecha-Godzilla’ and if I get the chance to see these guys onstage, it would be utter perfection for them to play these two one after the other as the ultimate prog-punk jam song and would melt the crowd’s collective consciousness by the end of the combination. Each member shows off their individual musicianship and integrity during EACH of these instrumental offerings as well as a combined unit working in complete syncopation.

This album still sounds ‘new’ with each listen and is one you need to add to your library and share with ALL, if you haven’t done so already. Let’s hope the “NEXT” is in the works, to be released sooner than later… keep it LOUD!! 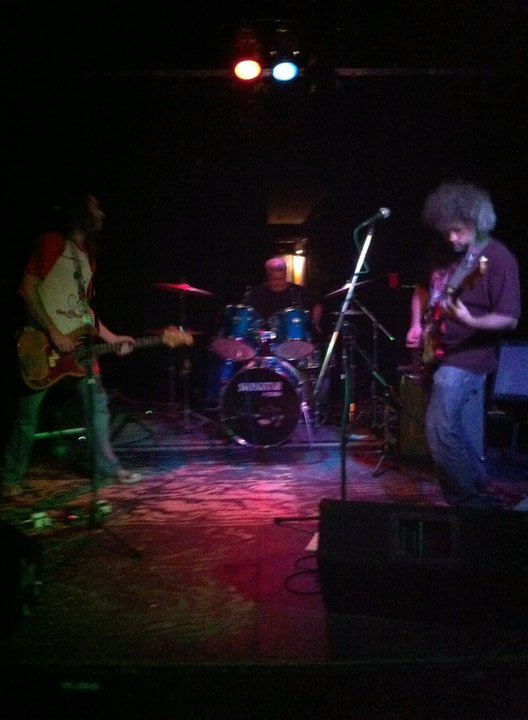