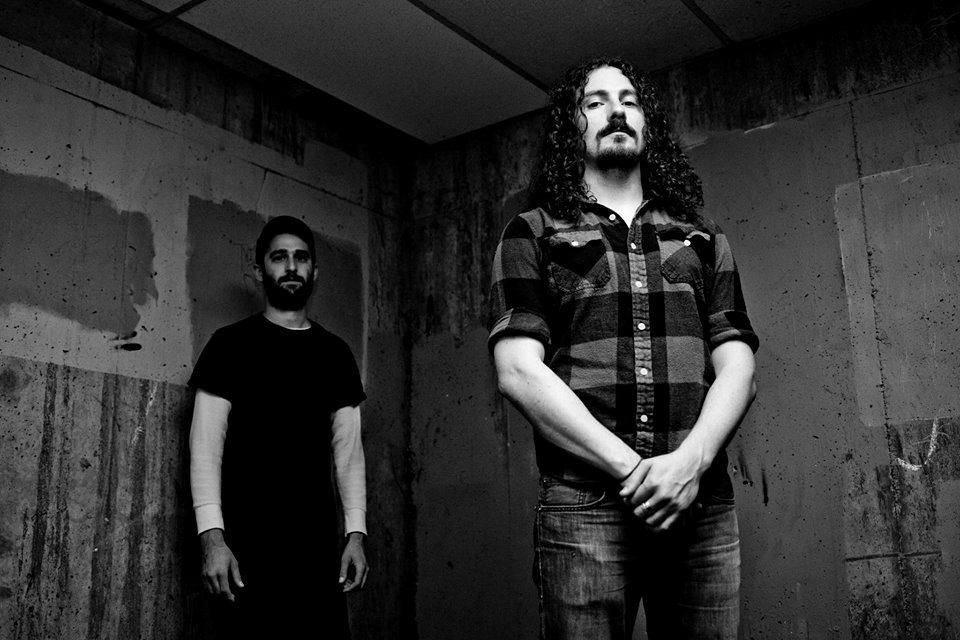 Two men brought together in the bands UNWELCOME and KESSLER decided in 2014 that they need to play their own flavor of music, saying they “designed it to be an undeniable source of power.” As the 11 tracks demonstrate, they aren’t kidding.

Andrea (guitar / vocals) and Maxim (drums) decided to say YES to stirring up a writhing pit of sweaty bodies, YES to heavy-music and want to remind each of us that “This is not a dress-rehearsal, this is the BIG SHOW!!” With an agreed vision that what they can do together should not be denied, this ‘collision of two different people collaborating as was always the intention’, have given this shape shifting revelation that has taken form in “Labbrador.”

Opener ‘Evil Sky’ comes out of the gate at full speed leaving no doubt that this is not going to be anything less than an assault with a relentless pummeling from Maxim while Andrea takes you along, making you want to ‘touch the sky’ with him. The multi layered backing vocals mixed with the ethereal guitar lines give all the body you need to not notice that there are no bass lines here.

‘Going Home’ / ‘Hey You’ and title track ‘Labbrador’ are further examples of what can be done with the swirling mixture of hard rock/stoner/post-punk can become when mixed in equal parts and then seasoned with some hardcore kicks and licks thrown in for good measure. ‘Blind’ shows that Andrea is not afraid to poke fun at some of his peer-group with the high-pitch tone he takes with alternating passages through the lyrics, sounding almost like some Bieber-prepubescent kid before he drops back to his regular growl into his mic emphasizing ‘it’s easy when you know’ as he spits over piercing notes from his Les Paul.

‘Perfect Black’ begins with a clean tone, something you wouldn’t expect from based on what has been heard to this point, but when Andrea’s voice hits 30 seconds in, it makes perfect sense.  When the first solo break hits, that clean tone serves the song perfectly. There are three tracks listing a guest performance from Xavier Iriondo, ‘Sixty-Two’ / ‘Think’ and ‘SheMale’ that show an even blacker depth to THEBUCKLE. ‘Think’ starts of with the thick distorted chords accented by a nice combo of snare and rim shots, establishing an almost galloping pace that smooths into a sweet flex-closing ride cymbal going wide open through the pauses between measures, Maxim showing his true prowess behind the kit as beat-master while Andrea and Xabier deliver supremely, making this sound HUGE without losing the identity of what THEBUCKLE is. ‘SheMale’ is another one to show their twisted sense of humor as Andrea says he wanted ‘more’ but ‘can not make it work’… cracked me up.

‘On My Own’ takes me back to ‘Portrait Of An American Family’-era MARILYN MANSON with the vocal delivery so MM in attack and intent and a deep-dark HEAVINESS in the body of the song.  It is obvious this is no joke ripping through your speakers. Disc closer ’12 Seconds’ is another facet to this gem of a band telling a tale wrapped around an Apollo mission, complete with injected radio communications, the last being the statement that “The heavens have become a part of Man’s world.” Started off with the sky and ended with it as well through the journey of this record.

The stand-out track on this one for me is ‘Sixty-Two.’  It with an even tempo that is immediately slower than the rest in true stoner fashion, and the loopy melody of the song will keep your attention as it curls around the tendrils of your brain, the vocal line bringing a DEFTONES flavor along as the perfect garnishment. While each song is well structured and written, this particular track brings a coherence that is at its strongest here. If there is one to be released as the lead-off from this record, this should be the one in MY opinion. Awesome stuff here, front to back and I would love to see them do it live and witness the ‘undeniable’ of this duo as they weave their visions of what they have described as “Dark and gloomy atmospheres tempered with obtundent, memorable melodies”. The world awaits gentlemen… \m/