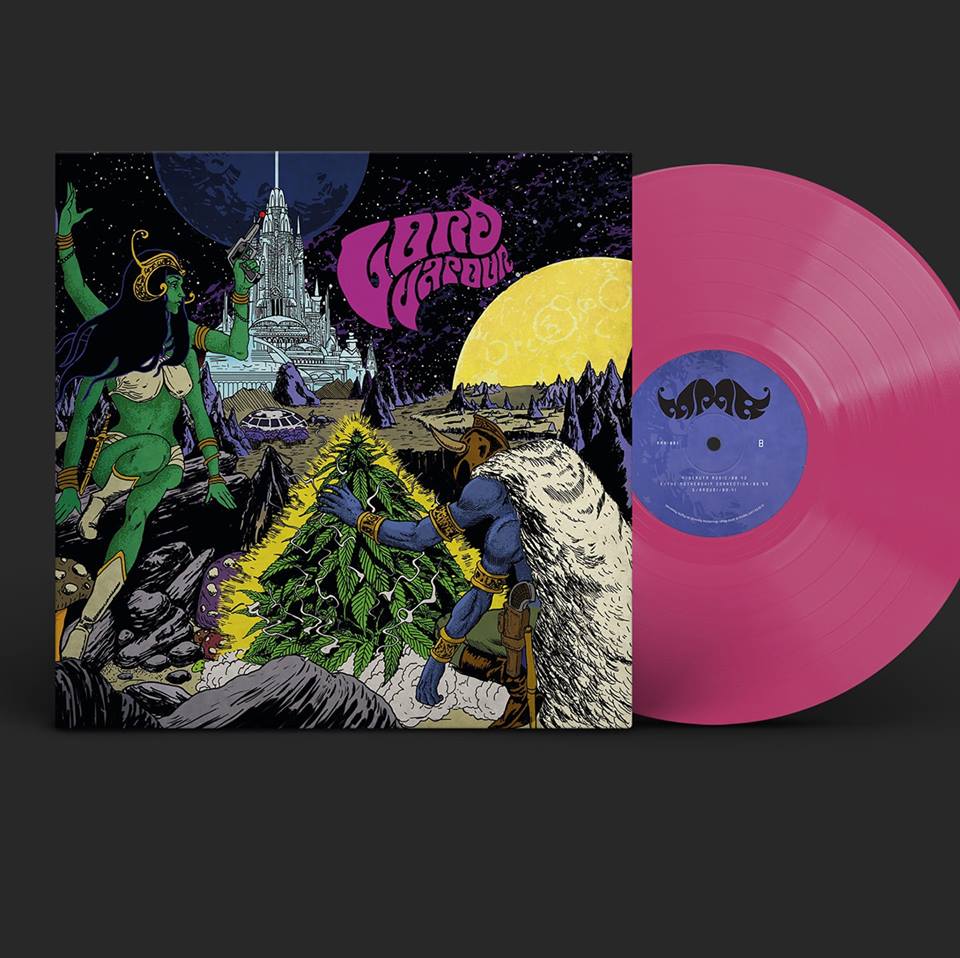 Loosely stated, this is an all-out, balls to the wall party band borne from a mutual violent-love of beer as the band cites in their description of how it got started.  According to that, Mathieu decides to go back to ‘scratch’ and sets up a group. Within a short time, with a lot of people and a violent love for beer, so is born POSTE 942. With thick, slippery riffs, the band merges the blues, stoner, a little grunge, elements of old-school punk and even some southern rock flavors here, complete with an ORANGE ™ amp sound straight from the banks of the Caramy, via means of the factory in Atlanta, Georgia. While this may sound like an extreme mixture of some elements that would not necessarily blend well, the concoction we are offered with this, the first official full-length release, is sweeter than the coolest southern tea with ALL of the kick of pure Tennessee whiskey over fresh-cracked ice and as we drink it in, we know we’re going to need more…a LOT more!!

Picture from the Making of Music Video ‘Whiskey’

Thirteen tracks clocking in at 39+ minutes, these songs do indeed cover the gamut of all elements mentioned and there is not a sleeper in the bunch. Listing their influences as ranging from AC/DC to NIRVANA, from QUEENS OF THE STONE AGE to FAITH NO MORE and even going from PEARL JAM to PANTERA.  These guys have no qualms about saluting their favorites and putting their own stamp on it at the same time, a hard thing for so many bands to do anymore. From ‘Color Of Red’ with an opening drum line that sounds straight out of MONTROSE‘s ‘Rock Candy’ before the pick slide down the guitar neck that marks the beginning of this tale of “Not love I see…” that rolls heavy and even to the ‘jangly opening guitar of ‘Devil’s Complaint’ with the lyrics of “What you need or you feel in this world of pain, all your gods and your dreams will not wash this rain.” The stage is set for this grunge sounding, stoner romp that is complete with an under-modulated guitar tone for the end section that will tickle the rock-fan in us all.

‘49.3’ begins with an engine rev before Usel’s vocal roars out with a fury equal to that 8-cylinder growl we started with and meet again halfway through and then roars past us at the end. ‘Punky Booster’ is true to the name with this pure-punk edged track, where ‘Grace’ is a slower-paced rocker that you can’t help but move to with it’s catchy hook before the pummeling drums and thunderous bass are back in your face with fills and heaviness galore showing they are a tight portion of this program and provide the perfect vehicle for ‘Seb and Seb’ to do their thing individually, while remaining cohesive in delivery.

‘Pigs In Paradise’ starts off with what could be any southern rock intro with it’s clean-ish guitar tone and tempo until the 1-minute mark when that stoner-feel hits back before we flow into that clean-ish guitar again, all under-flowing with Usel’s words. ‘Lonely Day’ is just busting with a SOUNDGARDEN vs FNM mentality and will rip your face off with the heavy as fuck melody and this off time cymbal tap that rings out in it’s half-muted glory. ‘Breathe’ is another faster romp that keeps it moving fast and hard.

‘Psycho Love’ Pts I & II did make me think of PANTERA‘s ‘Suicide Note’ pt I & II in that the structure is eerily similar, again I believe, in respect to an idol, and the vocal is clear and ringing over a beautiful acoustic progression that fits the mood and tempo perfectly and provoked images of standing with arms spread wide open in revealing from within with a sonic solo that makes your feet almost leave the ground following each note, and when pt-II hits the ground running, with a bass line deep and dark and brooding as those guitar notes keep calling out before the multi layer vocal signals the darkness gathering before the staccato guitar takes over the melody and the rage explodes into the mic again. Pure brilliance in arrangement and execution.

Standout track on this album for ME, and probably my favorite from these guys so far into their career, would have to be ‘Whiskey’. From the first notes, I felt like I was in somebody’s backyard down home here in the Southern USA listening to some good ole boys jamming and slamming away under the hanging branches swaying in a summer breeze while sipping some ‘shine and chasing that with some good ole Jack Daniels and when the bagpipes came in, all AC/DC-KORN in tone/feel, it was a perfect fit, each member given their three-second-solo bit at the bridge, and then back to the Southern-Slam this song is. Like I had stated earlier, I can not get enough of this one, and there is no slaking this ‘thirst’, even while I am drinking it down, in any other manner but to play it again and even LOUDER!!

Taking their time and fine-tuning each song to get to this point and using some stellar production values, POSTE 942 is ready to rise up and shine. Get this album the second you can, play it repeatedly for anyone you can, support them live if they come anywhere near you and keep it LOUD!!

Dead Acid People is a stoner rock band formed in 2014. In February, Guillaume (d) had posted an announcement to recruit musicians and Stéphane (g) responds to the call, and after a conclusive test, proposes to Alain (b), his friend, to join them. The trio works assiduously to consolidate the basis of a blend of rock embodying the sounds from Black Sabbath and Led Zeppelin, all the while injecting their own flavor into these dynamics, and by the end of the year, the group decides to recruit a singer. Several unsuccessful attempts later, in August 2015, with the arrival of Mathieu (v), the “training” is finally complete.

Fast Forward to March 2016 and we are presented with 35 minutes of this hybrid-stoner/punk meshing that contains 8 tracks that run the rails from the opening progression of ‘Ashes’ that has a single bass progression for two measures before being joined by the six-string as the drumline fast-fades in and we’re off and running with Guillaume, Stéphane and Alainshowing time spent honing their edge as a unit over the last almost two years and when Mathieu’e voice enters at 40 seconds with the words “Everything can burn, everyone must die, everyone, until the crimson sky” the stage is set for the tale of darkness, full of hooks and distortion and a vocal clarity lacking in a lot of first-time releases any more; no pro-tools sounding anything here.

‘Sell Me To The Dust’ hits harder from the first and the staccato drumline is the perfect cadence for the body of, where ‘Happiness’ comes out with bass solo with the minor cymbal-kiss before the rest of the band join in and then we hear “Looking for some happiness, acting like I’m someone else” in a somber almost-monotone before the power chords jump back out and your head is moving again. 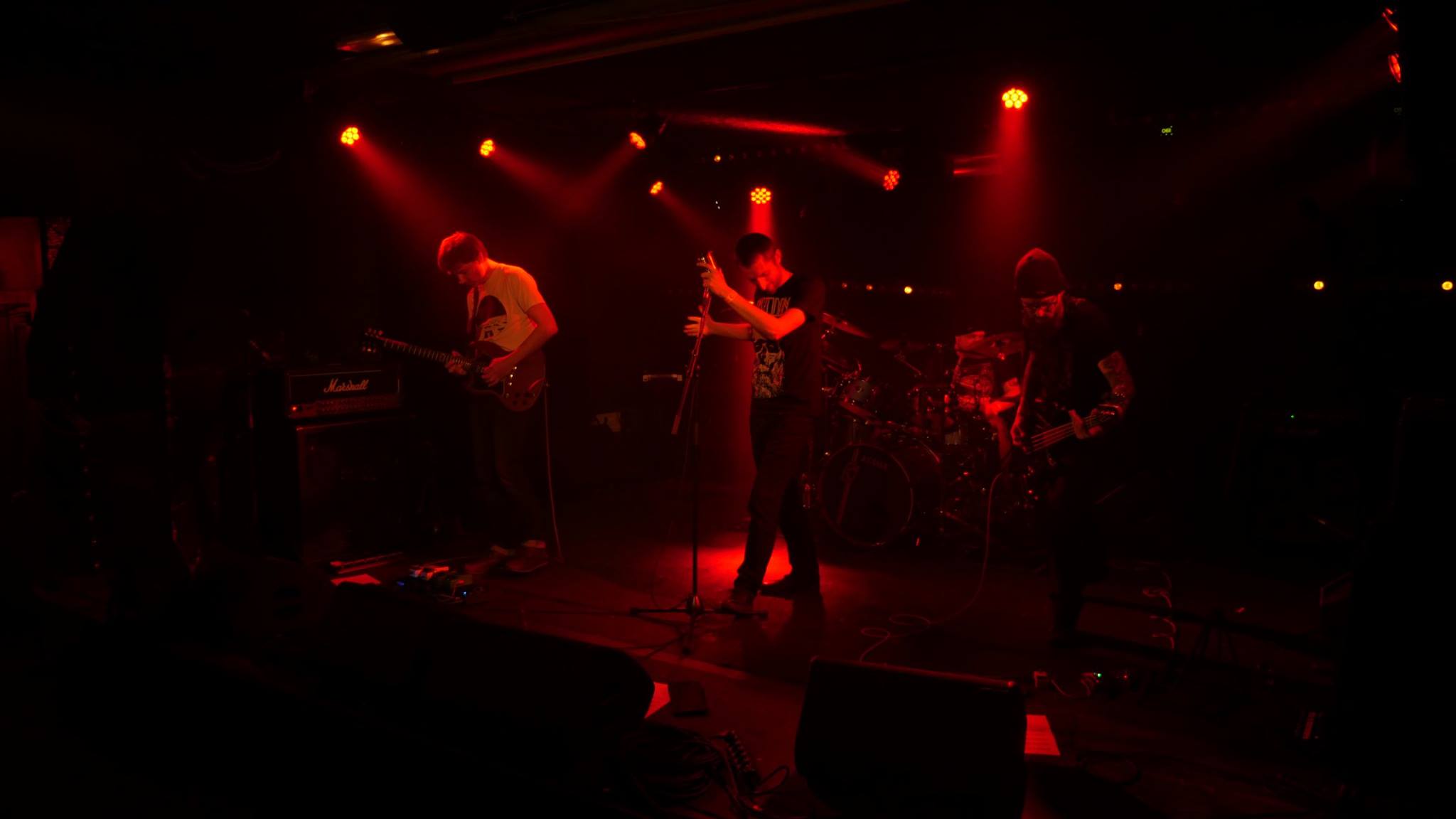 ‘Blood Red Tide’ is another bass-opened track but is faster and fuller and including  some cowbell that fits right in as “Now we dance together, now we dance forever, me myself and I,  we all die under a blood-red tide” before settling into a medium tempo for the first section. ‘Burn Out’ opens with a staggering guitar-swagger before the thunder returns to pummel everything in it’s wake, especially pounding mid-track, before the spaced out solo takes over before that opening stagger hits again to lead through to the end.

‘Let’s Go’ and Burning Man’ each open with a drumline hitting hard before that defining punch in the face from the rest of the band that allows the eerily clear vocal line to deliver the tale of each that keeps you locked down, drinking each nuance in. Standout track for ME, absolutely has to be closer ‘Weird Jimmy’, a rocker with an edge that simply stated “This is a story of Crazy Jimmy. This is the story of a weirdy man” that slams and jams with the power of time shift and winding guitar notes to satiate the masses including a chugging solo that is short enough to not dull the senses but season to taste.

Well worth your time if you don’t have it already, share it with every set of ears you encounter and support them live if they come near you!!