Legendary guitar virtuoso Marty Friedman has revealed the details of his next studio release, ‘Wall Of Sound‘, due this August 4th from Prosthetic Records. Produced by Friedman, engineered by Paul Fig (Ghost, Rush, Alice In Chains) and mixed by Jens Bogren (Kreator, Sepultura, Opeth), the disc “expands and destroys any conventional notions of instrumental music,” according to a press release. Two particular tracks, ‘Streetlight‘ and ‘For A Friend‘, were specially mixed by guest contributor, the famed producer for Queen, Mack. The song “Self Pollution” can be streamed below.

All “Wall Of Sound” preorders come with a laminate good for one VIP meet-and-greet to Marty’s 2017 U.S. tour. **Please note** this is not a ticket to the show.

Marty commented on several aspects of the new album saying: “This time it’s even more ambitious than that album was, a bit more dense, and, with any luck, more exciting for those of you who will hear it.”

He added: “There will be elevent or twelve songs in total. Sometimes a song you really love doesn’t make it to the album because it doesn’t fit nicely in the sequencing. Either way, we’re pushing sixty minutes, so it won’t be a short album.”

Regarding how the collaboration with Jinxx came about, Friedman told Guitar World: “I’m a big fan of Jinxx and Black Veil Brides. He came to my show in L.A. in 2015. Right after that, I was told that he plays violin. I didn’t even know that! Then light bulbs went off. I thought now’s the chance to really turn some heads by doing something that’s a little bit, well, a lot, unexpected to my fans and his fans.”

Long-time Baroness guitarist Pete Adams (also of the fantastic band Valkyrie) have amicably parted ways the band has reported. Pete’s departure is being fueled for reasons including spending less time on the road and making time to focus on a burgeoning non-music business and his home life.

Both Pete and Baroness leader John Baizley commented on this latest turn of events with Pete sharing: “I would like to say thanks to all of the Baroness fans far and wide and all of the support through the ups and downs along the way. I feel beyond fortunate to have had the chance to travel great distances with Baroness and to meet so many of you. I honestly never thought I would be able to do what I have done with Baroness. Playing alongside my oldest friends, playing music that isn’t simply readily accepted by the masses, and sharing the stage with some of the best musicians and bands from around the globe. That said, it’s time for me to focus my energy closer to home and not on the road. However, this isn’t the end of my musical career by any means as I plan to continue working with Valkyrie. Again, thank you to all along the way, and most importantly thank you greatly to the current, past and future members of Baroness.”

At the same time, John adds: “I need to take a moment, on behalf of myself and Baroness, to recognize and sincerely thank one of my oldest friends and bandmates, Pete Adams, as he moves on from Baroness to pursue a new phase in his life. I feel fortunate beyond words to have shared the stage with you for nearly 25 years, since we were barely teenagers. It would be impossible to articulate the value and impact of the personal history, friendship and musical bond we have enjoyed throughout our lives and within this band. Through Baroness, we’ve seen that friendship grow further and often in unexpected ways; we’ve taken part in so many adventures together that it’s difficult to keep track of them all. It’s never easy to part ways but it is important to highlight a couple of things: First, we offer unconditional support and respect for Pete’s decision and we’re excited to see where his path leads. Second, Baroness will forge ahead with an undiminished passion and as much creativity as ever. The narrative of this band has often felt as though it falls into distinct chapters, and while we’re excited to move into the next, we are equally sad to see Pete go. When Pete and I were kids, as he’s often said in interviews, we shared a dream of growing up and playing music together and seeing the far corners of the globe. And we did. Thank you Pete, for being a friend when I needed support, a brother when I needed family, and a bandmate when you and I had a hunger to see the world.” 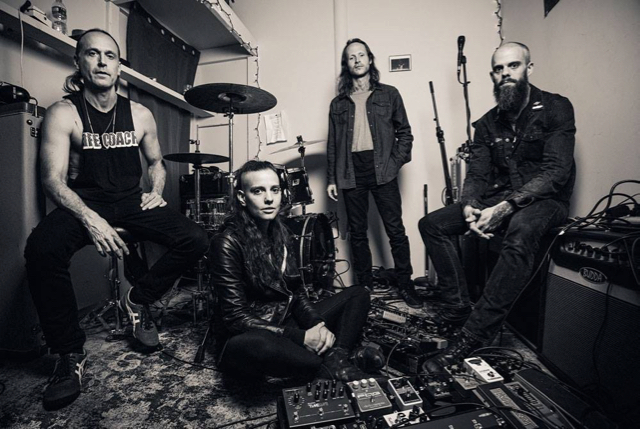 Baroness have added guitar player Gina Gleason (pictured second from left above), a Philadelphia native who Baizley, Nick Jost and Sebastian Thomson are excited to have on board:

“With Pete Adams’ official last show just over a month behind us, and a European tour on the not-so-distant-horizon, we are proud to welcome our new guitarist, Gina Gleason, into Baroness, and we hope our fans will share in our excitement and provide her a warm welcome into the Baroness family. She has worked tirelessly in recent weeks/months, not only learning the specifics of our material, but slowly beginning to carefully stake out her own personal territory within our sound. Throughout the lifespan of this band we’ve had the genuine pleasure of working with incredibly gifted artists/musicians, who recognize in Baroness the need each member has to contribute something of their own musical personality, rather than imitate one that’s been established, not simply to respect the individual contributions of past members, but to develop a genuine connection to our songs, old and new alike. Gina’s ability both to learn our music and to find her own voice within our songs has been inspiring to observe, and it helps once again to renew our belief in this band’s music, which we’ve come to rely on as a true wellspring of creativity and musical discovery.”

Baizley, adds: “I really thought I would have become a jaded musician at this point, with nothing left to discover and no will to try, but each subsequent year proves me wrong. We play a hometown show with Gina tomorrow, followed by a European tour and my only regret is that we won’t have time to go everywhere on Earth we’d like to before the urge to get back to writing our new record overtakes us. We’re bringing a bunch of songs on tour that haven’t been played in many years; we’re anxious to dust off some of these earliest Baroness songs. Thanks to all of you who have offered your support over these years. We’ll be seeing you soon.”

The founding guitarist of legendary U.S. progressive metallers Fates Warning, Jim Matheos, has announced the release of the debut album from his new ambient instrumental rock project, Tuesday The Sky. ‘Drift‘, the band’s first full-length effort, is set for release on June 30th via InsideOut Music, and sees Matheos pushing the envelope of his sound and playing ever further. Tuesday The Sky will allow Matheos to explore a type of atmospheric and instrumental music, including expansive textures and ambient electronica, that his fans might not expect of him. The music of the project is being compared to that of such acts as Brian Eno, Boards Of Canada, Sigur Ros and Explosions In The Sky.

‘Drift‘ also features the talents of God Is An Astronaut’s drummer Lloyd Hanney, who provides a rhythmic backbone that is rampant with alternating styles and precision playing. Other guests include long-time OSI collaborator and former Dream Theater member Kevin Moore who plays keys on two songs as well as Anna-Lynne Williams (Trespassers William, Lotte Kestner), who provides ethereal, ambient vocals (of the non-verbal kind) on two other songs.

The album will be released as special edition CD, black LP + CD & digital download. Further details will be revealed soon.