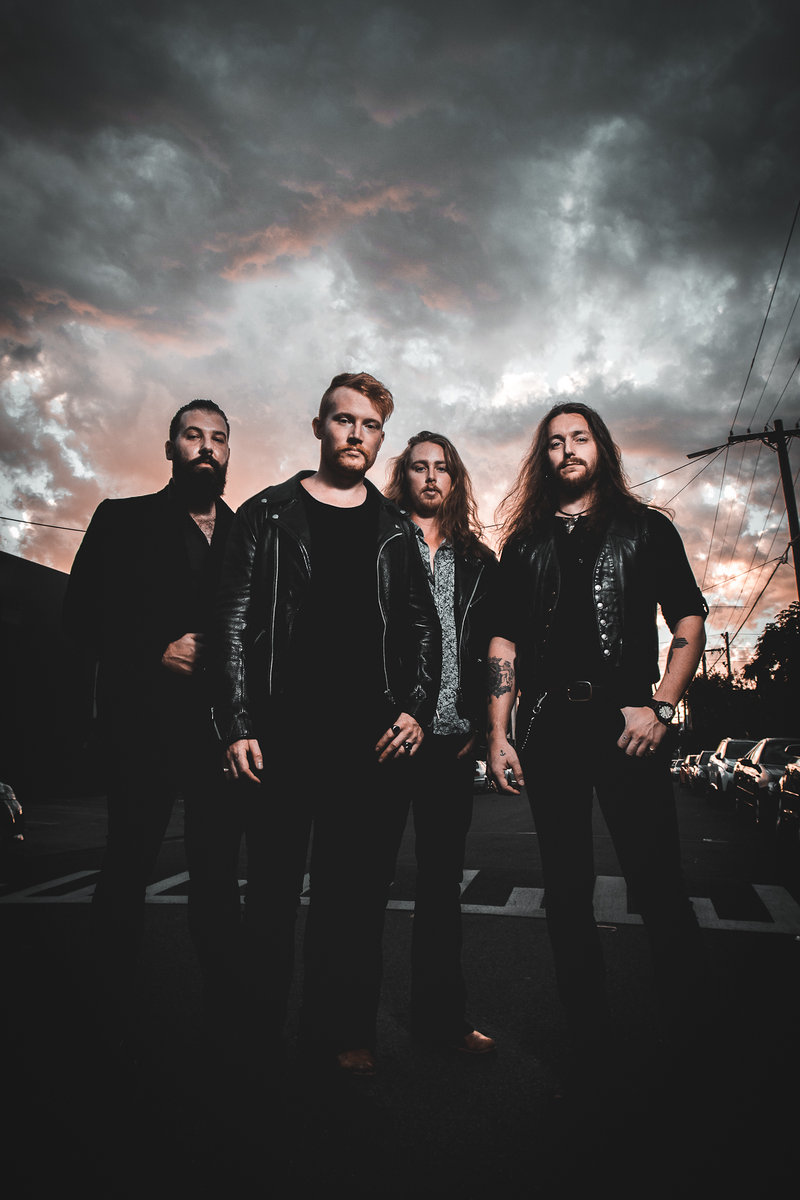 Quote – “Fans of Black Sabbath, Pentagram, och and so on will not be disappointed!” Enquote. The first words I saw used to describe this three piece from the land of the often refereed ‘NWOSHM’ movement of the last several years, with bands rising to the forefront that are letting the rest know that they are just bloody sick of nu-metal and the glut of ‘pretentious hipsters’ that think they know what good old blues-based HEAVY is about with their auto-tuned machine based garbage and hyper-polished turds being passed off as the best-yet…

Back to basics, balls out and cranked to the top, these guys show that they are here to represent with some of the best progressions and time shifts held high on thick bass runs that hit you in the chest with each note. No splintering of genres here, but higher, CLEAR vocals that are easily understood, unlike so many that permeate anymore and the fit is tighter than a glove with the precision-playing that slices cleaner than the sharpest blade.

Coming together in 2011, Adam and Mattias spent the better part of the next two years consumed in a series of jamming/drinking sessions in the metropolis Mjölby, located in the eastern part of Sweden, playing hard rock, which did result in an EP and an LP.  It was in 2013 that  they joined forces with Jocke, a hard-hitting drummer with roots in both heavy metal and other types of music, that everything coalesced into what is now presented to us as NEKROMANT.

Thirty-five minutes totaling from 9 tracks that stand out on their own as individuals as well as are the perfect summation as a whole. From the immediately head-banging inducing opener ‘Stoned To Death, Doomed To Die’ with it’s quick-gallop paced tempo and screaming squeals of harmonic bending strings over that soaring vocal, the stage is set and even the seemingly effortless time shift halfway through, you are hooked for what will prove to be exactly what you have been waiting for to show; that true rock-and-fucking-roll still exists. This is proof positive that it is indeed alive, well and flourishing in all the riff-laden, relentlessly paced ecstasy you could ask for. And when ‘Funeral Worship’ hits, slow and rolling low, it is the precise gear-shift needed, fully owning a doom-laden structure with Mattias’ voice ringing clear and true, never wavering in delivery all the way to the sudden-stop ending.

‘Black Velvet’ comes out in full 80’s metal glory, wringing of a sound that made me think of a mixture of Italian masters BULLDOZER meets WITCHFINDER GENERAL in a salute to the essence of that heavy duty blues-rooted guitar onslaught so thick in tone that you almost forget there are only three guys in the room here, where ‘Ashes & Rain’ is from the start all loopy and heavily, dare I say it, ‘progressive’ in structure and pace in the arrangement that transcends any labeling with the various soft-touches scattered throughout this song.  Again, further showing a versatility you may not have expected after the last full length, yet sounds honest and natural here, and in my opinion is what makes for legendary music. It can really be heard if you mean it when you play it.  When it is from the core of your being as these songs each show these three are doing, then they become timeless and relevant as would seem to follow their original statement in intent.

From the soft fade-in wash cymbal of ‘Inside Yourself’ with another crop of time-shifts from hell, perfectly stirred into this brew, to the instrumental indulgence of ‘Mardröm’ through to the even-slower measures of ‘Never Saved’, there is no room for dissapointment here as you have been consumed along the path you have been walking with this album to get to the title track ‘Snakes & Liars’ that gives its ALL with its staccato opening that is close to being the fastest beat on this album and you are pulled right along this almost two minute run through the “Fortune and Fire” described.

Closer ‘Spelmannen’, which translates to English as ‘Player’ is sung in Dutch, has an almost traditional-folk song feel to it before the power chords hit, and even then, still maintains an anthemic feel that made even my black-heart feel a little less dark in the soaring solo sections and chorus alike. Excellent choice to wrap this package together and there is not one song on here I would not want them to play in a live setting!!

Keep this one as an option on your best-of lists for 2017, make SURE it is part of your library, AND your best buddy’s too and catch them live if the chance comes to you… keep it LOUD!! 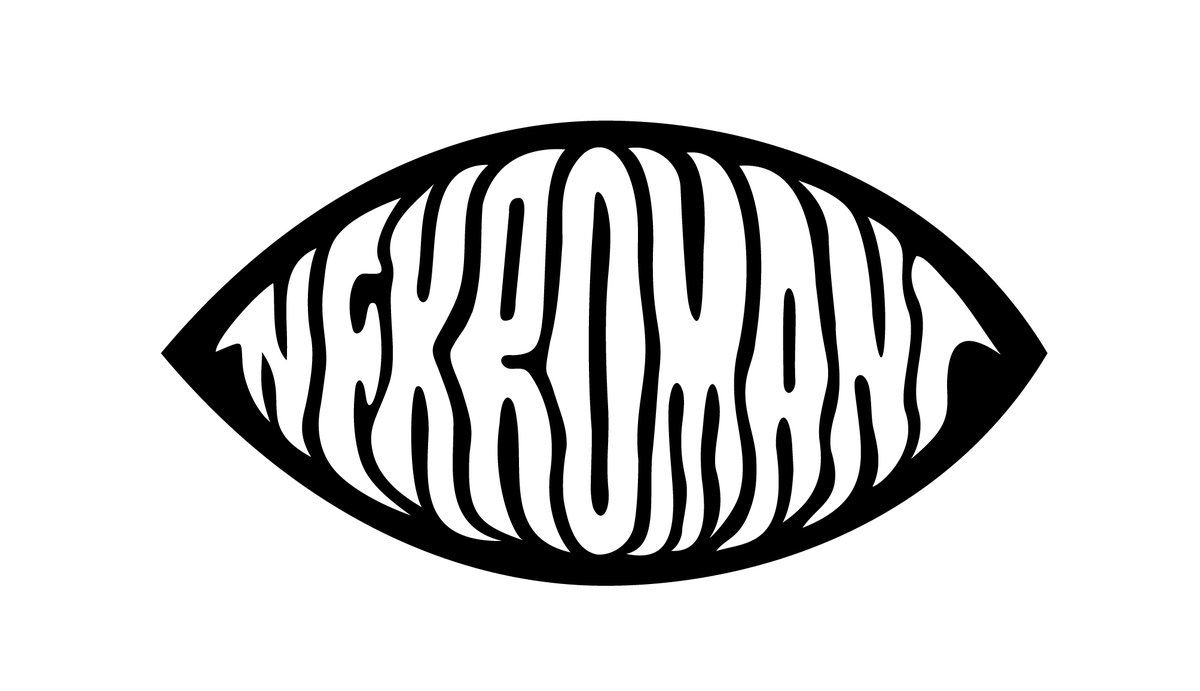 Self-described as three Spaniards and an American that came together sharing a love for stoner-rock and the blues, it is no surprise that this was recorded in Madrid, was subsequently released within the same month reported as recorded in and these six tracks are the first release from SPIRITUAL DOPE, using these 34 minutes as an introduction to this particular flavor to come to us from their minds to our ears. Smoke ’em if you got ’em…

Title track and opener ‘Dopeland Blues’ hits slow and heavy as one might have expected and the dual guitars take one side of the mix each and then weave back and forth as you exhale as deeply as this has made you breathe in, and there’s the rush… You inherently breathe in again, even deeper, holding it for all you are worth as the squeals jumping back and forth, through the bass that has your sternum pulsing and the cadence that your pulse has synced with. You exhale and grin wide in the ‘knowing’ and the stage has been set as this track flows as a tide slowly coming in and you can’t help but to keep looking through the dense fog in front of you as the cymbals wash across. 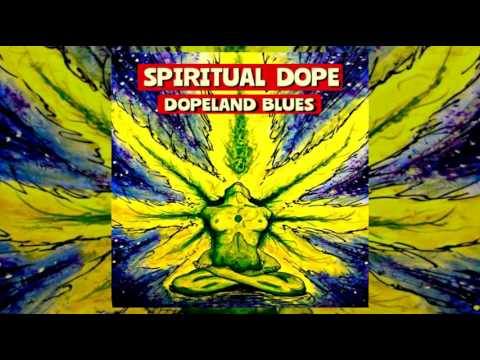 Whether you are a fan of instrumental tracks or not, this is indeed an incredible ‘first-taste’ across your lips. ‘Calcutta’ wastes no time jumping into a faster pace with an almost Texas-nasal quality to it that fits the chunky power chord assault that is the body of this rocker. Each member is spot-on and rolling hard, every break exact, each note screaming and you gotta have more to the point that just turning it up is not enough. ‘Karma’ is slower than the first two and Jesús’ voice is right there asking for you to ‘Let me count the ways’, and before you know it, that perma-grin is back on your face again, if it has left yet that is… pure stoner-bliss!! Whether you are baked, or not it is mesmerizing, and simply put, is just not long enough for me, even after the mad guitar break during the final section to the fade out.

‘Broken’ hits with a single, right side progression, before the left and rest are right back in front directed by that voice of rings in commanding presence to take you down this lane that suddenly kicks heavy as hell, not dropping a beat and chunky all over that again before shifting back with that virtuosity that requires that connection these guys have in FULL force as shown by this debut, SO rich in musicality and that ‘mojo’ that lacks too often, particularly from first-outings.

‘High’ really needs little mention, is the most cohesive pure-romp on this in MY opinion, and is the stand out for me and is one of those FULL-VOLUME compositions that could go on for another 10 minutes and would still leave you wanting more. Closer ‘In The Sky’ is almost sing-song for the two minute plus and the soft guitar tones suit the tone and when the solo section rings in, you are looking up with your mind’s eye as the strings command.

Pretty incredible album, hope they keep it coming as they have set the bar pretty high right out of the gate and get this one like, yesterday. Crank it up for all around you and support them live if you are given the privilege… keep it LOUD!!