This marks the first released outing for ELEPHANT BELL in almost 9 years and is the first full length release in the history of. Each previous release embraced a punk-production level, complete with guitars that were scratch-thin and pissed off lending credo to the claim for each that the band was even MORE stoned than they had been with the one before it. I expected no less than more of the same as they had pretty much defined themselves in this manner and how much difference could nine years make and from what I could glean, there is only one new member in the personage of J.J. taking the bottom end to heart. I went back and re-acquainted with some of the older tracks to get ready for this release and when I noticed two familiar song titles ‘The Sun Is Going down’ and ‘Dreamwheel’, I was ready to hit play and soak in what was about to come at me. . .  Engage… 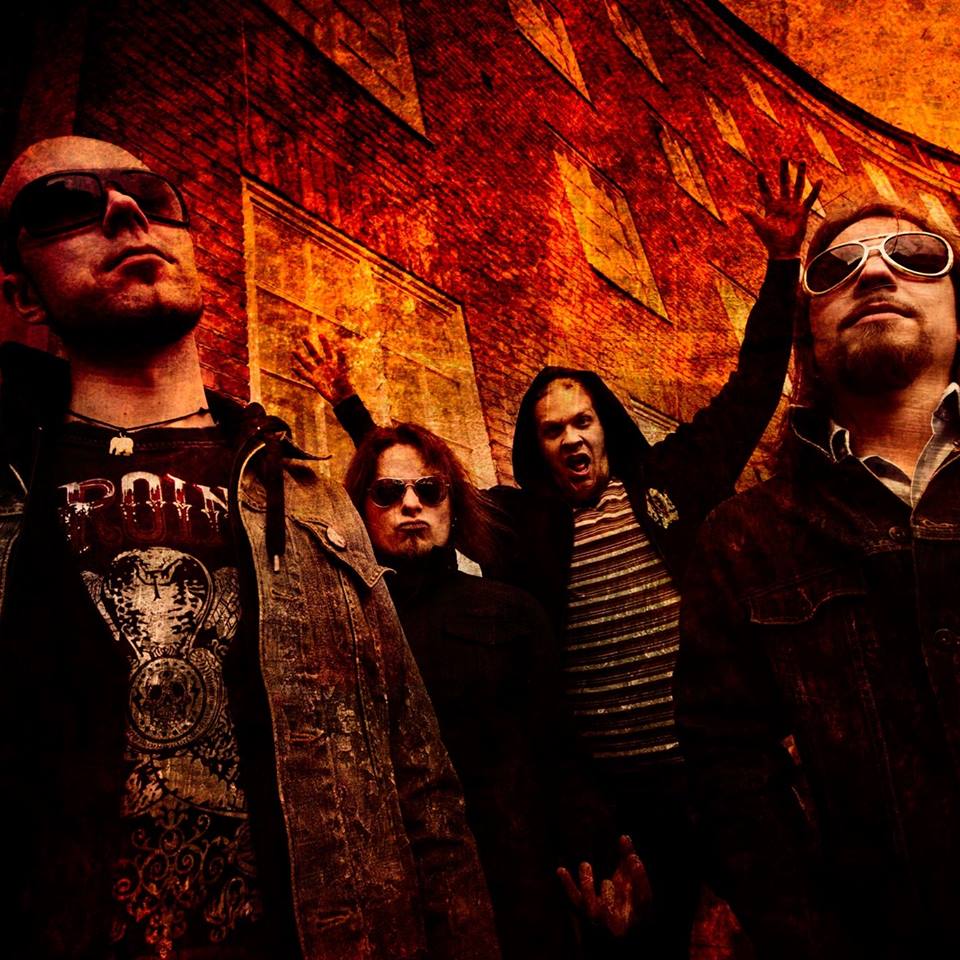 What jumped out of my speakers with this psycho-phased out guitar line twisting over Tommy’s vocal before this thick pure rock and roll freight train is rolling at full speed as ‘So Pure’ rips you out of your seat, setting a tone that I in NO WAY expected and was devouring with each note, my heart racing in pure joy at the level these guys have risen to in this return, exceeding every possible expectation I had conjured up and ‘Demon Seducer’, ‘Escape’ and ‘Straight To Hell’ keep that rock-n-roll aesthetic working flawlessly while ‘Bug In The Soup’ shows another side, but not necessarily what you might expect; remember, lose the preconceptions with this album, as ‘Mojo Filter’ will remind you as the multi layered voices of 3/4 of this quartet lead you along with another side, again, not what you may have been expecting, especially with the shimmering solo sections that seem lightly laced in a middle eastern flavor, just hinting at harmonics in the softest distorted touch.

‘Come See The Show’ would be the PERFECT track to open each show just as ‘The Last Scene’ is the obvious and most fitting choice as a last song of the evening, even as an encore in it;’s blissfully baked mixture of Moog sounding keys spinning fuzzed out chords that could have been lifted from some 70’s sci-fi, until that ever heavy bass line takes over your pulse and then those lilting voices fade in and out, left and right until at 2 minutes in, Tommy grabs your attention again with an almost whisper voicing that forces you to pay closer attention, taking it all in. ‘The Sweet Babylon’ is probably one of the most dynamic songs this band has written to date and utilizes ALL facets of stoner / psych / and sludge thick bass tones to create one of those songs that is over just too damn SOON as the sheer flow from beginning to end is just precision and beauty in motion that you want to just keep going on and on, as the reworked lean-and-mean version of ‘The Sun Is Going Down’ reminds you of how far this band has truly come since 2008 when they first let this one out of the box that while holding that feel of the original, it is beyond obvious the level of musicianship to make this as razor sharp as anything out there.

And then there’s ‘Dreamwheel’, which I thought was a remake of the track on the 2001 EP of the same name, but I can’t recognize that and this as similar in ANY manner of than name. The slice and dice guitar tones and just how beyond rolling in perfect symmetry as this one, and the whole album for that matter, demonstrates to be, this seems to be the perfect stage for the world to take notice and dive in deep. Buy the record the second it comes out and support them WHEN they come to your area!!

Post: Void Cruiser has always been there. Only now the crew have awakened from their cryogenic sleep and they are on a holy quest. A quest for The Massive Resonance. This is how we begin…

And so is how my introduction to VOID CRUISER began. I discovered that this is the third release, the first being 2013’s EP ‘Motherload’ followed in 2015 with the full length “Overstaying My Welcome” and now in 2017 we are gifted with “Wayfarer,” a seven song collection of pure stoner-metal bliss; fuzzed out bass lines, staggered tempo’s and fills running amok with searing, soaring guitar solos that perpetuate every minute that has no other voice voiced communications. Grab your vaporizer/pipe/bong/etc. as we travel along with this mod 1.0 vessel.

‘A Day In Which No Man Was Born’ serves as the lift-off and slowly takes you through the entry of the edge of this sector as the background becomes the majesty that is the interwoven expansive net that is propelling you into the unknown ahead with no apprehension.  Instead anticipation as the power chord driven final section of this track shifts as you can almost feel the turning of this vessel which effortlessly flows to the next track ‘I Didn’t Lie, But Know Now I Should Have.’  The band swings right into a blues-tempo’d, doom-slow and low tale of Salo speaking of the “voice” inside of him, letting us see through his eyes what is transpiring within and why he knows why he should have. As the last note rings out, we suddenly hear footsteps and a quick staccato snare pulls us into ‘As We Speak’ where we are told that we will ‘hear with your eyes and see with your ears’ as if he could reach you. Electronic sputters lead us right into the power chord beginning of ‘Madonnas And whores’ where Salo tells us that when he was all alone, in his own narcissistic way, all he could feel was love for everything. Now that he is willing in his own altruistic way, all he can feel is just jealousy as he further exposes the events of the ‘looking for comfort’ and there is no way it’s gonna fall. At the four minute mark, we begin the turnaround portion of this leg of the journey with the tastiest guitar section this record has offered up so far and filled the void around this spinning vessel perfectly carrying you though the ectoplasmic expansion that surrounds you outside until you are told that the ship has been taken over.

‘Seven Years Late’ is a tale of Salo speaking of ‘your heart of gold, my heart of steel’ and his careening vocal carries you further long. telling of a dream he had, saw his grave, seven years late. Faster footsteps, a coughing man and ‘All Over Nowhere’ begins that Salo is ‘The man that helped you, he’s the man that stabbed your back…’ and then asked if ‘you’re having a good time baby’ with the same monotone sneer you would expect from somebody that tells you he knows for sure that you ‘go around.’ Perfectly accentuated at the end with the same running footsteps at the beginning before final track ‘Maailmann Kallien Kaupunki’ which per a translator means ‘The most expensive House’ which leads me to imagine some spectral equivalent of The House of Heaven or some such. Speaking no Finnish, I can not be positive, but the music of this 10-minute soliloquy gave me a feeling of bliss that carried to the very end as the very last faded out through a backdrop of white noise that seemed endless until it was no more…

Compared to the previous releases, VOID CRUISER have come a long way with “Wayfarer” and have grown not only as a unit, but as a concept and they have executed the concept quite well here. If given the opportunity, I encourage you, the reader, to find their tour schedule and get out and see how this outstanding studio effort is translated to a live forum.  We can not recommend this album enough…