The Unofficial Return of Omēga and the Superstar

Album Art:
The cover is similar to his previous album without distortion. It’s a black and white side profile shot with an upside down cross with an extra horizontal line.

History:
In late 2016 and early 2017 Manson announced and released a working title for the album named Say10. He also said that the projected release date would be Valentine’s Day 2017, needless to say, it was put off until a further date because he had a couple more ideas for the album and needed time to produce them. These songs being “Revelation #12”, “Saturnalia” and “Heaven Upside Down”. In an interview with Loudwire he stated: “Those three songs take place where, if [the album] were a film, it’s the opening, the middle and the ending. Then there’s the song after ‘Heaven Upside Down’, it’s sort of the end title credits where it’s really surmising the story of the record, which is to be interpreted by the listener.”

This album was produced by film/video game composer Tyler Bates. (He also produced The Pale Emperor) During the time that this album was being made; Manson produced a song for a movie that Bates was working on, Atomic Blonde. The song is a cover of a Ministry song “Stigmata.” (Which I have included here because it fits in this album as a bonus track, (along with the Mystery Skulls remix of “Kill4Me”) The last two tracks are a throwback to the Mechanical Animals period of his career.

Review:
Unlike his previous releases from this decade this album has a more of a “throwback” sound of his heyday of the 90’s. He also keeps some of the changes he has made in the aforementioned albums. There is a meme that describes it perfectly: it has the cover of Born Villain with the words “Who are you” and then it has this albums cover saying “I’m you, but stronger.” This album has more of a dirty sound; in terms of more distortion, not lyric content, it sounds like whoever mixed/mastered the album let the sound go into the max.

The Opening: In “Revelation #12” there is a call back to one of the chants in “Irresponsible Hate Anthem” and “The Reflecting God” (from Antichrist Superstar). It is also a sort of sequel to the soundscape they put out in 1994 on the Get Your Gunn single. (i.e. The repetition and some of the samples in the background.) “Tattooed in Reverse” is closer to his work in the early 2000s, Holy Wood/The High End of Low. The sound itself is more industrial than the music at that period (with the use of samples and drum pattern).

“WE KNOW WHERE YOU FUCKING LIVE” is a mix of “The Beautiful People” and “Mister Superstar” the fast and then the quieter parts being interchanged with the shout/yelling. It ends with him whispering the beginning of the track; which helps introduce us to “SAY10” which is a lot like some of the songs from Holy Wood with the electronic sound of Mechanical Animals. “KILL4ME” sounds like it was a song that could’ve been recorded during the Mechanical Animals session with a hint of “If I Was Your Vampire” style lyrics.

The Middle: “Saturnalia” is the longest track on the album, but, in a way it feels like it is about the same as the others. The repeated drum pattern works as a way to get you in a sort of trance as you hear the back-masked sounding words in between delivery of vocals. The song also works as a part one to the Ministry cover, even though I highly doubt he planned it that way. This song ends like “WE KNOW WHERE YOU FUCKING LIVE.” “JE$U$ CRI$I$” sounds like either a song from Born Villain or The Golden Age of Grotesque. The song is like two different songs, with the second song being put in the middle of the first. It is almost a breakdown, maybe that is what he wanted the song to be like. “Blood Honey” is the first of the slower more mellow tracks. It sounds like, once again, a song from The High End of Low.

The Ending: “Heaven Upside Down” the title track is the second of the slower tracks and is almost a continuation of the previous track. It has almost the same structure and tempo and lyrical content, but it isn’t quite the same song. “Threats of Romance” is the most traditional rock song on the album. It is just has the Manson mix on it like a distorted vocals and the way the Clavinet in the background. I included “Stigmata” (Ministry Cover) here because it fits the album. I don’t know why it wasn’t included but it brings the beat back up from the previous three tracks. “Kill4Me” (Mystery Skulls Remix) is a Japanese bonus track that I included here because it is another track that is an example of the Mechanical Animals being brought into the “modern” version of electronic music and is a good song to bring you down from “Stigmata” as it (in a way) takes you out of the album. 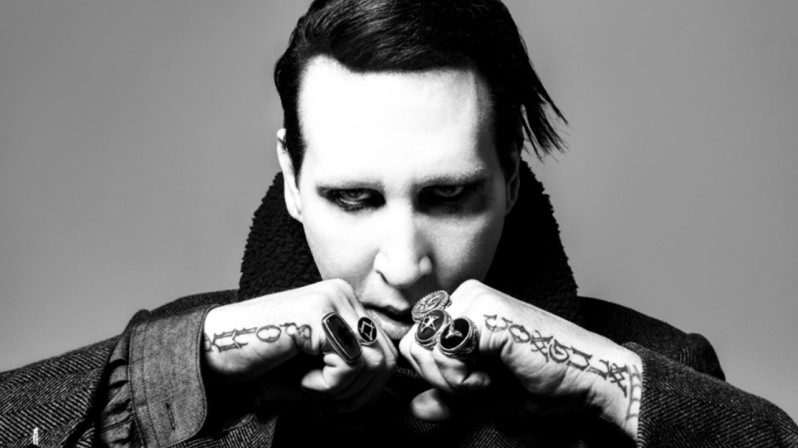 This album is an excellent example of Manson showing his ability to reflect on his past but make it new in a way. Like Alice Cooper with Welcome 2 My Nightmare or like David Bowie with The Next Day. In a way Marilyn Manson is a Alice Cooper/David Bowie 2.0 taking his influences and putting his spin on it, even from his early days as a leader of the Spooky Kids. If you are a fan our just like his music but have stayed away since the 90s, this would be a good time to come back.