Having previously heard both of these guys, in their individual projects, Medavon, the purveyor of ‘hellrock’ that he puts forth with Lockjaw and Murder Love God, and Michael’s is as a solo artist, the bassist for Pound of Flesh, vocalist for Misery Machine and lists ‘Instrumentalist’ with The Insect Pins, each unique in approach, tone and content. I decided it best to go into this record trying not to let my familiarity with their previous output taint my palette for this 6-track long voyage into a collaboration not witnessed before. In their own words to describe this project, quote “There are happy places and there are dark places. This album takes a journey into the dark recesses of the mind, while trying to maintain the proper amount of optimism to see the sun again. “ enquote. And then I pushed play…

Slow fade in as “The Art Of Letting Go” sets the tone, dark and menacing with a slower tempo, nuance intact, Medavon gives from his core with his sig vocal delivery that seems touched in a clarity in the mix that adds to the final product. “Dark Places” enters with a softness that is like a wet razor-blade in it’s inherent sweetness that belies each forward as ‘It’s getting cold…’ I could almost feel the temperature drop with the words. Less than 9 minutes in and I am rapt in, no need to go anywhere but here!!

“Conflict” starts off with an almost ‘clean’ guitar, slight reverb for presence but with the slightly quickened tempo from the last two, it adds a feel that seems to give an ‘upbeat’ feel with lyrics as sardonic as any put forth previously from either… “The conflict’s on, dismember”. The corner of my mouth curled in delight.

“Bleeding Out” is something lush and languid in essence and is still dripping in ‘dark sun and rain’, just another day…’ and shows a depth of musicianship in the arrangement and delivery from each to almost, dare I say it, make this release even more ‘accessible’ than any previous from either, this speaking to the average fan as well as the hardcore’s and long-time fans of. The implication being snapped-up the moment it, this record, is experienced.

“Pale” enters as it should, a seeming later-evening tale of confrontation without confronting, just stating the brutal truth, asking for the same with each query, knowing the shadows hide nothing. Pure Medavon tale-weaving and is followed perfectly by “Exhaustion”, which as the fastest cadenced composition with transitions that flow in precisely sliced sections and that keep you rapt, the volume having reached max.

The mix is top-notch, the arrangements are captivating and the aforementioned musicianship shown by these individuals, in a project said to have started back in 2014 all leads to the same conclusion… perfect timing in a year that is already lacking much ‘substance’, this is one you HAVE to sink your teeth into, savoring each drop that runs down your chin. Each track stands on it’s own and together, this is not a snack but a meal to share. Get it out to all in your fold and support them in any project you are given the chance to witness… keep it LOUD!!

The first time I heard Murder Love God, was a few months after we had gone to see Milwaukee’s own LOCKJAW for the fourth or fifth time and Medavon had shared an advance with my wife of an album he was working on. While listening, the first thing we noticed was that the feel was even darker and deeper as Medavon was perfecting the blue print for the style known as “Hell Rock”, a mixture of all parts industrial/rock/electronica with a twist of trip-hop thrown in. When recently asked to describe the ethos behind Murder Love God, Medavon replied,

“Undefined and unexplained pieces of rotting parts floating down the sewer to a destination unknown. Excessive thoughts and complaints portrayed through music from a sometimes twisted perspective. These fragments are broken and often bitter but hopefully a few will find them comforting or entertaining.” Each previous release, including the remix’s have been pretty incredible in their own right and hinted at ‘something more’ looming in the shadows, and with this EP, that ‘more’ is finally revealed for the masses. Five tracks, 22+ minutes and this one was released as ‘parts’ over the course of the beginning of this year, coming together as an EP released on 7-4-17. 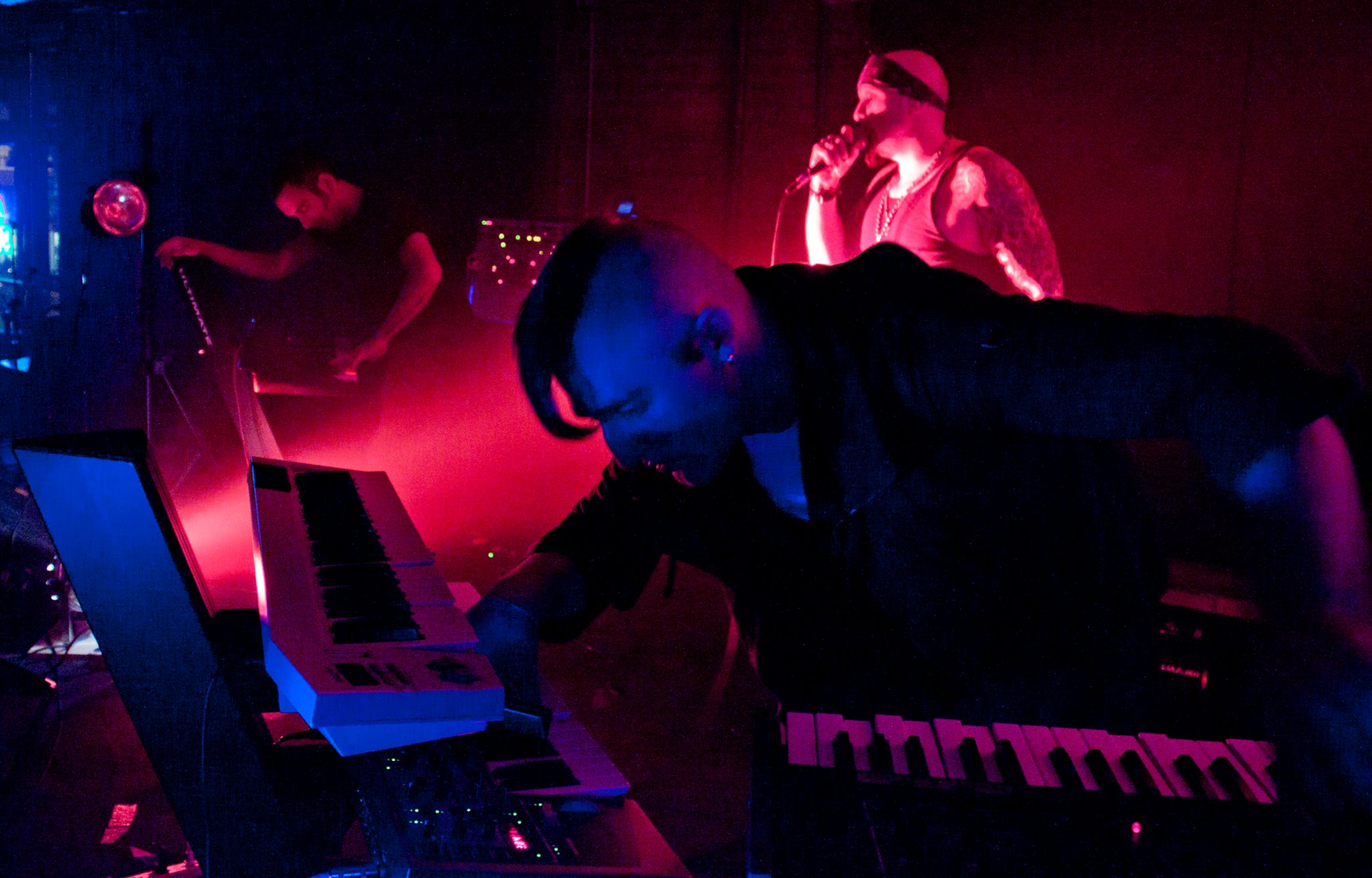 Opener ‘Bipolar’ comes right out of the gate with that familiar staggered tempo that grabs your attention and refuses to let go as the stark-dark twists around you immediately as you grasp onto the consuming keys that seem to linger just out of reach and still, right there as Medavon’s ethereal vocals seem to come at you from all directions as you grab every letter of every word that flows forth and as the body falls into disarray as the song itself, and everything else winds to… nothing.

‘Can’t Look Away’ opens with a slightly faster tempo and Medavon busts right into a rapid-fire vocal that to my ears is a new twist that rides the cascades of ghostly guitar tones delivered with a  surgical precision that gives the body of this track the added feature of ‘plush’ that has never entered the MLG camp in such a manner and even the harmonics mixed with the pick-slides are an indulgence that fills the air to an even higher level of ‘completeness’ to make this one of the most concise songs to come from Medavon’s hand yet.

And then comes ‘Fire Walker’, the longest song contained on this offering and is the pick for the video teaser. This is the exact song to give a complete smattering of the flavors contained here in and shows the growth and purity that musically demonstrates a confidence earned and a maturity in the arrangements and running order that were there before, but not quite to the level that this release is burning with. ‘Cannibal’ is even more of the progressions that while natural, seem second nature here flavored expertly with the seasonings of the life-blood of… 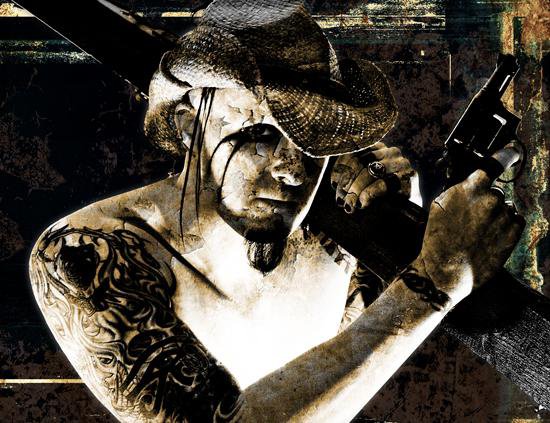 Standout track on this one for ME, is the closer ‘Devil’s Favorite’. Shortest offering included, it has everything I look for and devour greedily from a Medavon composition; a relentless beat, full bodied and driving and that special lyrical twist given as only he can do with flair and rage all given with the roar of the master-purveyor of Hell-Rock, delivering with “To taste it, don’t waste it, just touch the sky and shake it…” and the tone is one of need as you have to run along to savor each drop of this glass of absinthe-stained tears to the very last.  If it doesn’t hit you between the eyes once you have traversed from first note to last, Medavon has a response for that as well…

“That is acceptable….my comfort is failed and my soul has been sacrificed by desire. Please enjoy my testimony.” Listen once, drink deep from his veins as he has poured them once more into his art and feel it flow through you… “A musical acid trip on the industrial tip.” he said.

If this is your first sample of, then by all means GET IT ALL like, YESTERDAY!! If you are already one of the ‘aware’, add this to your library and share it with ALL in your personal realm. Support them live if you are given the chance, and keep it LOUD!!