This “Self Titled” EP is the first outing for this three piece outfit and is made up of 4 tracks clocking in at 26+ minutes and from front to back. VULPTURE has put together some of the most raucous guitar progressions, thunderous bass lines and hammering drums keeping absolute syncopation in place combined with a vocal split between drummer and guitarist that works pretty well; already demonstrating a flexibility that a lot of their counter-parts do not possess yet. When asked to describe themselves, the collective answer was, Quote “After attempting to play with different musicians, Diego Maud and Vicente met up for practice for the very first time at the end of 2014. After slowly narrowing it down to 5, and then 4, until finally this power-trio locked in and so was the birth of Vulpture, a rock and roll mixture of doom spirit, walking in the desert of stoner, looking towards the heavy psych skies.” Enquote. Referencing those that did not quite make the cut, it has been said that, “On the other side of that universe, the ex members just decided to set up a cheap clothes shop.”

Opener ‘Wasteland’ opens with all the ghostly doomish power chords you could want before 30 seconds in, a light hammering tap on a ride and open notes rattling ribs enter before at the minute mark, all three jump in and we’re off for this ride across the aforementioned psych-skies in a 70’s style jam that sets the stage for this record that churns along until the first word hits at 2:49 in with an attention-grabbing snap-vocal, gruff as can be and by the time the last section opens with a screaming solo, it is clear they are firing on ALL cylinders.

‘The Oath’ comes on at a slower pace but twice as thick and even heavier in tone and the swarming bees of staccato guitar notes is mesmerizing leading to the vocal break and the time shifts and fills being held high by the precision bass playing that gives support in spades. This allows the other two members to take this, and really EACH song here, to the highest plateaus of clarity in expression and delivery of their individual parts and the collective result is full-on rock-n-roll purity.

‘Fuzz Cloud’ is even more of the same with an added sneer in the speed and fury that keeps you moving along in pace, even after the two-minute mark when the tempo slows, bass steps to the front over drum fills that are the perfect punctuation before the power chords are back punching the air full of holes, leading the the last section that gets as dark as night and ugly in the best sense of with the meanderings of each member and it is stoner-bliss all the way to the end as they crank it back up to full speed.

Closer ‘Rocky Road’ has this lower tempo opening filled with harmonic bends and swithing to that churning heaviness and back with the underlying rhythm section giving all the room needed to keep your head moving in perfect time before the vocal explodes across the front. Maniacal laughter and all, further proving the versatility of each member.  They fit together as so many puzzle pieces and if this is any indication of what we can expect from Vulpture, I can hardly wait for more!! The production is that ‘live in the studio’ feel and is perfect for this serving as it were.

Get it NOW, share it with ALL in your personal realm and go support them live if you are given the chance… keep it LOUD!! 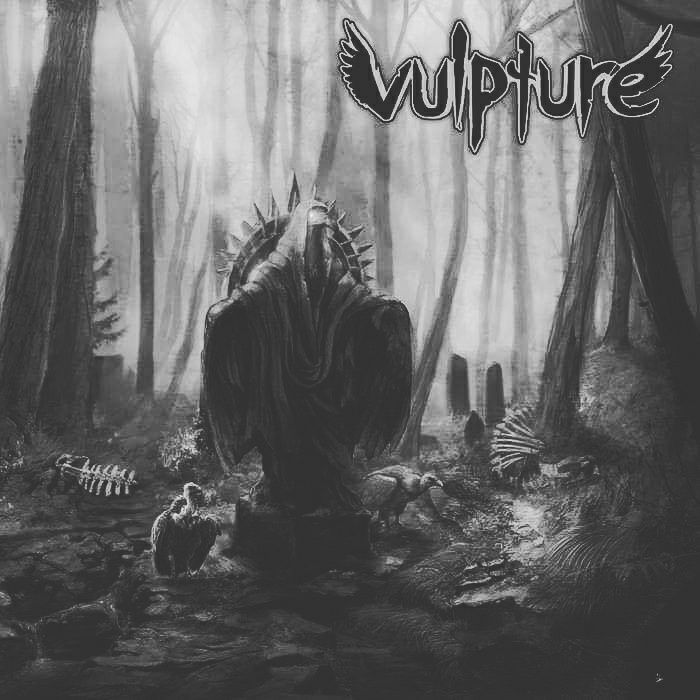