REVIEW:   Self described as “Cosmic Stoner Blues” comprised of “Heavy Psychedelic Riff Rock”, this three piece powerhouse is about to blow your mind and speakers in one fell swoop with this latest release of five separate compositions that stand alone and even better as a complete package. For the next 39 minutes of smoke filled vocal lamentations with a guitar slide so smooth, you can hear the blue in the glass as the bottom end rumble gives you that ‘body’ to close your eyes and roll along with each moment, taken along with all of the leading pace of this heavy-hit drumline that has enough perfectly timed fills to satiate the most veracious headbanger.

Jumping out of the gate with a SLAMMING cover of NAZARETH favorite ‘Hair Of The Dog’, GEEZER let us know they are in fine form and ready to kill with this record. Even the lead break is done in true GEEZER fashion foregoing the talk-box for more subtle phrasing and phase shifting to traverse the even darker zone to the anthemic end chorus with a full on power chord finish before the soft, slow fade into ‘Stressknots’ with a low end rumble packed with power punch until a pause…”Big apple sky dreams, make way for lesser things…” and the tone is set for the remainder of what represents the finest work so far with a sense of power and precision brought to the table to delight the faithful and pummel the unknowing with a mastery that has been gained by time spent perfecting their craft. 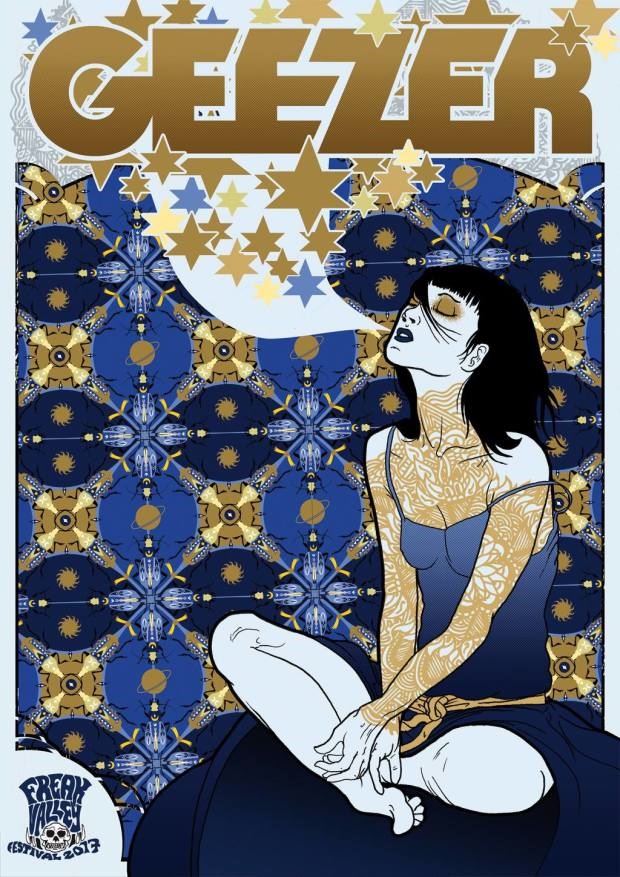 The slow spaced-out fade in of title track ‘Psychoriffadelia’ belies the crushing intent that hits HARD at just under two minutes when the slow-flow tempo takes hold over the SIK-solo laden body of this song.

For 10+ minutes the most delectable notes cascade over each other in the languishing flow of stoner bliss, all the way through the ending that slides effortlessly into ‘Red Hook’ with that smooth as glass transitional repeating note that lends itself right into the melody before that beautiful slide comes back accenting the flavors melting together in your mind. Soft, plush and warming in delivery, this is sand as the summation of a lifetime, in that haunting, delay strewn delivery “I don’t wanna leave, the time ain’t right, got nothing left to put up a fight…”, you feel that grip in your chest and it is perfection. From the endless fade out to the power-keyed fade in of ‘Dirty Penny’ the final shifting of gears is here and there is so much fuzzed-out wah-pedaled thickness in your face as that blues-body is filled with the might of power that these three slather on from head to toe and beyond as “Dirty Penny gets it right every time…”

The production of this in arrangements, clarity of each mix, stepped up production values and even the running order is amazing and allows ‘Psychoriffadelia’ to shine as the diamond in GEEZER’s catalog to this point. BUY THIS RECORD the second you can, share it with everybody and go out and support them LIVE if you get the chance…and keep it LOUD!!