Review:
Traffic Death is certainly an interesting band name. I figured I’d dig into this bad boy while I was stuck in the passenger seat of a large suburban-type vehicle on a long road trip as I tilted my seat back for a nap. Don’t let my nap fool you, this album is heavy as fuck – I just happen to sleep incredibly well with loud abrasive music in my ears. What I can’t sleep through is shit music. It wasn’t long before I nodded off and found myself in a very non-vanilla sex dream about Miley Cyrus that unfortunately ended too soon. Whether Traffic Death’s lullabies inspired my sweet images of leather and chains and Miley, I can’t say.

So now that I’m fully awake I’m giving Dead End a more serious listen. Traffic Death describe themselves as a “high speed, violent crossover 4 piece”. I see no reason to re-invent the wheel here as they’ve nailed their sound in six words though I will elaborate later. Near as I can tell, Dead End is their 3rd exclusive release but they also have a split release with The Lurking Corpses… whoever they are (I’m going to check them out for sure).

Dead End starts out with “Spontaneous Decomposition/Nothing to See Here” which reminds me a lot of M.O.D. and Billy Milano. I hear aggressive, thrashy, unapologetic hardcore with a touch of dark humor. However, it’s not long into this ingeniously titled tune before it steps up a notch, both musically and with the vocals leaving my comparison behind moving to a more Converge-cult sound. 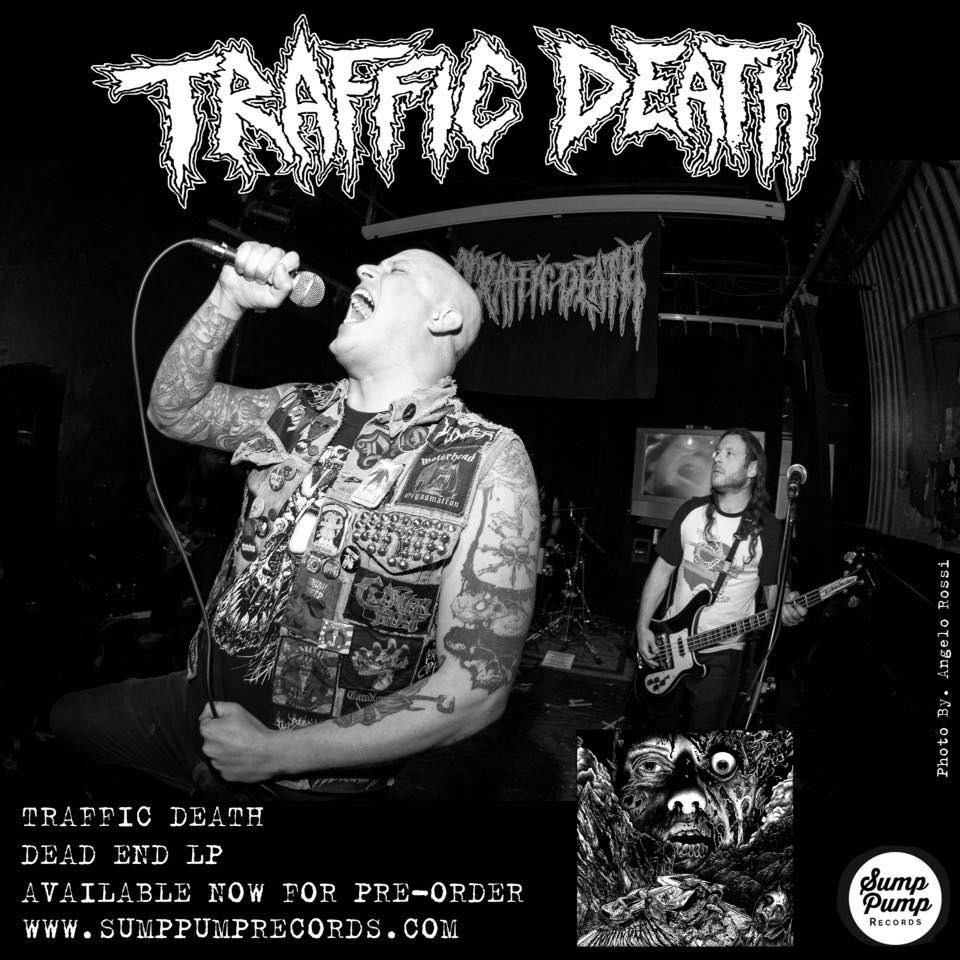 “Mandatory Sentence” opens with some seriously fun speed metal guitar work from Garan Drozd that I just was not expecting after hearing its predecessor. What comes next, though, caught me completely off guard. Nate Phillips rips a speed metal scream reminiscent of early Tom Araya. The rest of the track goes somewhere else but the change in direction is completely fluid.

I’m not going to track-by-track this album because the rest of it is more of the same. Clever and darkly comedic song titles perhaps over-use the “/” to translate multiple concepts. There’s a merge of, or shift into and out of, several styles. It seems to be random but if you go onto the band’s (hyperlinked) Facebook about page and read their influences and you know even half the bands, it all makes perfect sense.

My biggest complaint about Dead End is the fact that it’s only 24 minutes long. So even in waking, Dead End is a would-be wet dream cut entirely too short.