Star date: 8/30/17 – Space, time, … as everyone even somewhat familiar with Albert Einstein theory of relativity knows  one’s perception of them changes when traveling at the speed of light. Music strangely enough has a similar effect which I was reminded of while listening to the “Starsplit” album last night. An endeavor by two stoner rock bands from Berlin who decided to share some vinyl Cosmic Fall and Aphodyl released a split aptly named “Starsplit” on PsyKA Records, a small underground label from Karlsruhe, Germany. This epic journey has a total run time of 6 tracks lasting 1 hour and 17 minutes on their CD release and 4 tracks lasting about 47 minutes on their Vinyl Release. I found I really didn’t care about time and just enjoyed the moment on each song, which is what good psychedelic/stoner rock is about. Normally I don’t talk about each song on an album but I feel I would be doing these guys an injustice if I didn’t explain why I liked each of their songs.

On the A-Side of “Starsplit” is Cosmic Fall. Founded in June 2016 by Bassist Klaus Friedrich, and drummer Daniel Sax.  With 2 impressive self produced Heavy Psyche albums “Cosmic Fall” has returned from the  stars to lay down some more of their otherworldly instrumental space rock with an urban feel to it for us.

Galactic desert rock is what I like to call the albums 1st track ‘Overhead Intelligence.’ It begins with a slow bluesy guitar jam  done by Mathias Rosmann accompanied by Klaus Friedrich’s mellow bass notes emphasis by a few well timed drum beats. Then drummer Daniel Sax helps to kick the song into warp drive allowing Mathias and Klaus to amaze the listener with a stellar guitar performance. ‘Blues at CME’ is pure  ZZ Top instrumental worship that feels like a late night cruise on the back roads of Texas in my cheap sun glasses where a UFO lands and some hot space chicks abduct me to take me on a cruise through the stars. Closing out the Cosmic Fall side of the album is the Bonus Track  ‘Sleeping Pandora.’ Beginning with a Bass and Drum lead by Klaus and Daniel while Mathias plays a far away psychedelic guitar that seems to ebb and flow like the ocean tides. A superb track to close out Cosmic Fall’s 39+ minutes of Cosmic Traveling!!  Up next on Side B….. 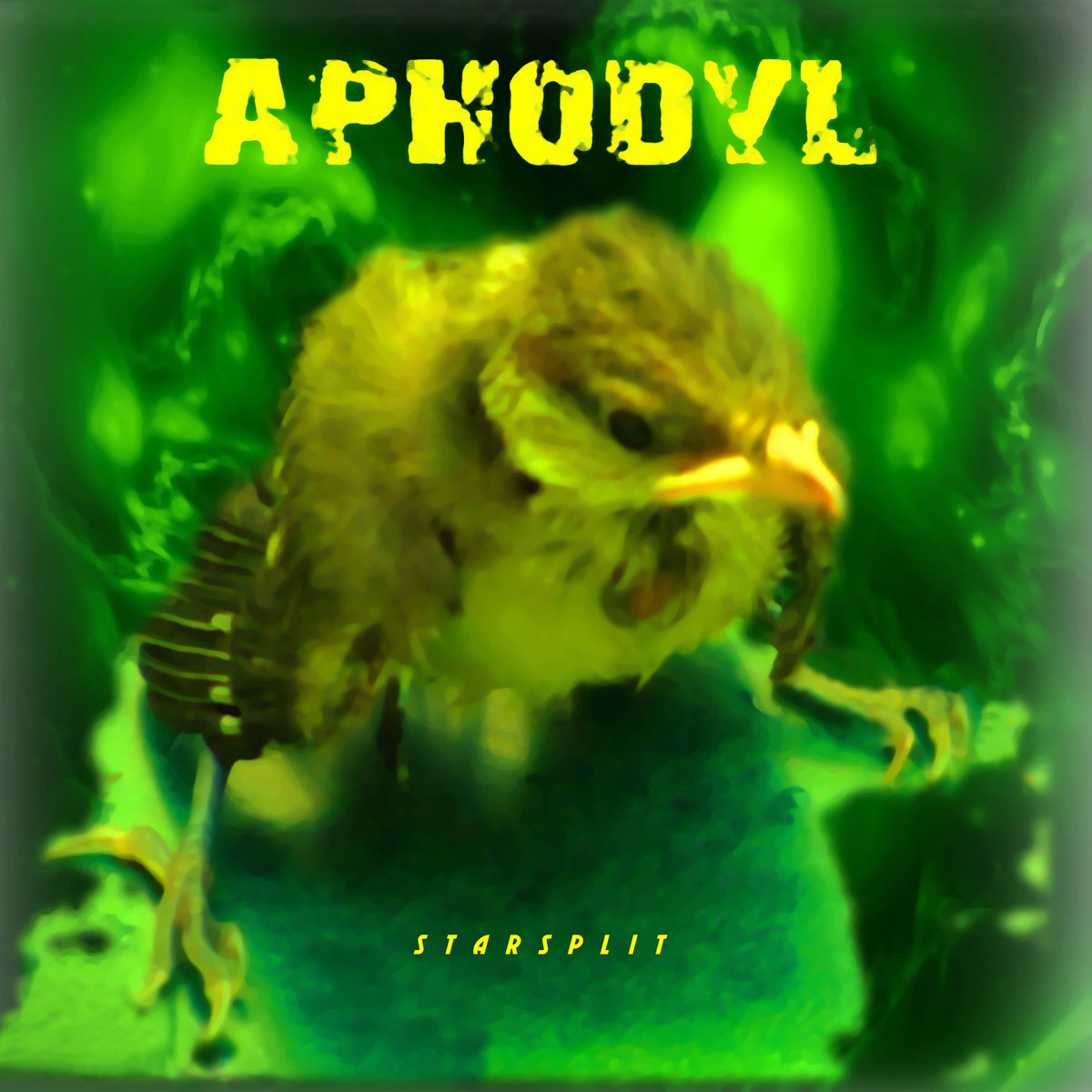 On the B-Side APHODYL!! – No matter the medium I have found Germans have always seemed to have a big Avante Garde art scene that challenges people’s perceptions. Biene, Holli, André & Arno are no exception. Playing music that comes from their minds with much influence from the psychedelic and Krautrock realms, (Pink Floyd, UFO, Hawkwind, Jane etc.) APHODYL fearlessly experiments with sound. On the  APHODYL side of “Starsplit” is what I consider to be 1 long song that has been separated into  3 movements simply titled  ‘Part I, II and III(bonus).’

‘Part I’ begins  with what sounds like a bluesy heavy psych guitar lead by André with some jazz style percussion and bass by Hollie and Arno. As the band starts getting into the song they start working in the strange psychedelic sounds. In the second movement  you feel like you are under a desert sky riding along on a caravan under the stars watching flying saucers through the combination of  instrumental sound effects by Biene, Middle Eastern style guitar playing and that chugging bass. Then at the mid point the lead starts taking off all the while the band is adding sounds from their synth and the bass by Arno begins to feel like its speaking a strange mantra. Then the third bonus movement begins with sounds of a sultry night with a cool bass and drum lead in then the electric blues guitar starts playing music you can actually feel. I’d love to hear more by APHODYL and will be scouring the internet to see what they have available.

While you can still buy Merchandise this album is no longer available for purchase on Bandcamp but fear not you can still get CD’s and Vinyl direct from the band, Cosmic Fall.  Simply drop them a line at their email cosmicfallband@gmail.com.