Right now I’m sitting here at my laptop struggling put words together to describe what I just heard, and come right to the point rather than lose you in the lines of a long rambling review. Doing so will be difficult but I must try. Not too long ago I got a promo release of the new album “Awakening” by Blues Funeral, the band’s sophomore album.

As one who feels music rather than just hears it, playing what’s described by Blues Funeral as music influenced by “Early rock, proto-metal, jazz, classical, and things that make your skin crawl”  this is definitely the kind of music that speaks to me. What impressed me most about “Awakening” was the whole package. The harmonious vocals, the lofty guitar leads with earthy rhythms and the drums that gives the music a heart. This music took me back to listening to the late nights listening rebroadcasts of “The King Biscuit Flower Hour” on the local Classic Rock station were I was schooled on rock as a teen.

“Awakening” is what I would call a new AOR (Album Oriented Record) classic.  If you dig bands like “Deep Purple”, “Cream”, Led Zeppelin and The Allman Brothers then you are sure to dig this. The flow of the album renders you to listen to it in its entirety to let the sonic glory shower down and permeate into your being. These are the songs that stood out most for me:

‘Awakening,’ the albums title track sounds like kickass hybrid of a 60’s proto metal and classic 80’s metal song and establishes the band’s sound for the listener. Taking the lead guitarist and vocalist Maurice Eggenschwiler opens playing a soaring guitar lead in and is then followed by a soulful organ lead by electric organist, guitarist, and vocalist Jan Kimmel (El Janni). Throughout the song El Janni and Eggenschwiler play both competing and complimentary sounds that kept me waiting to hear what was next.

Track 4 ‘Firedrake’ blew me away. Featuring the vocals of Ms. Kelly Cousins with Lyrics by: Jan Kimmel.   This song is inspired by “Cormac McCarthy’s ‘The Road” and speaks of hopes and aspirations in a post apocalyptic world. Full of organ, bluesy guitar riffs and leads;  Eggenschwiler,  El Janni, and Ms. Cousins are simply amazing.  Refusing to let up Track 5 “Casimir” grabs the listener with lofty guitar and vocal leads, melodies, harmonies and rhythms.  While Eggenschwiler and El Janni are as amazing in The closing track ‘The Gathering Dust’ drummer Cory Cousins, and bassist Gabriel Katz shine through.  The riffs are sublime and hard hitting.  A perfect way to finish this release in proper form…EXCEPTIONAL!!

Blues Funeral will be playing a CD release show on August 25th at White Oak Music Hall in Houston, Texas alongside Doomstress, Fiddle Witch and the Demons of Doom.

REVIEW:
Doom fans this is Terry “the Ancient One” and I want tell you about an upcoming release from Magnetic Eye Records called Genkaku  (Japanese for “hallucination”) by a band called LowFlyingHawks. A follow up to their acclaimed 2016 album Kōfuku the band latest album “Genkaku” will once again feature Melvins drummer Dale Crover and bassist Trevor Dunn (Mr Bungle) alongside the dynamic instrumental duo of doom AAL and EHA.  Genkaku also features Melvins frontman King Buzzo who lends his vocals on two of the albums tracks.

After listening to LowFlyingHawks first album “Kōfuku” and then the  early release of their album “Genkaku” I feel I can say they lived up to their boasts that Genkaku would be a doomier // riffier album full of tectonic guitar dirges and simmering intensity. While listening to their latest album I could feel the darkness.  The feeling it gave me was rather like the chills I got watching the Japanese supernatural horror movie The Ringu (The original version of the the Ring). This is one of those doom albums you sit in a dark room and listen in it’s entirety to get its full effect. All the tracks on this album are out of this world my favorites are ‘Virgin Witch,’ ‘Space Wizard’ and ‘Sinister Waves.’

Genkaku is available for Pre-Order, the Digital Album will be released on August 25th, 2017 and is also available in Vinyl and CD Digi-pack. Genkaku was produced, recorded, and mixed by Toshi Kasai (The Melvins, Big Business), and mastered by James Plotkin (Electric Wizard, Moon Duo). If you like post-metal doom, shoegaze and Agalloch this will fit into your collection quite nicely.

“Genkaku” is sure to be a best-of-2017 contender. Pre-order Genkaku below and get ready to be fucking floored.

THE BLACK ANGELS – “Death Song” / 11 items, 48 minutes… this is what I knew of this ‘gathering of 5 individuals’ as I pushed play for the first time. Had not heard anything previously. Wide open with a clean palette. No expectations, nothing preconceived.

For the next 48 minutes, I sat, transfixed on every note, every beat, each word that was delivered in the purest expressions of control, dissonance, commitment, greed, desperation and the ultimate loss. I had no urge to rise, no need to leave, and dropped below the surface in the echoing timbre of Christian’s vocals, Stephanie’s perfect mix of body and fill as Kyle, Jake and Alex flex their individual AND collective muscle to offer one of the most original releases I have heard yet this year. Showing their influences and sounding like no one else in particular, this collection of compositions is nothing short of stellar. 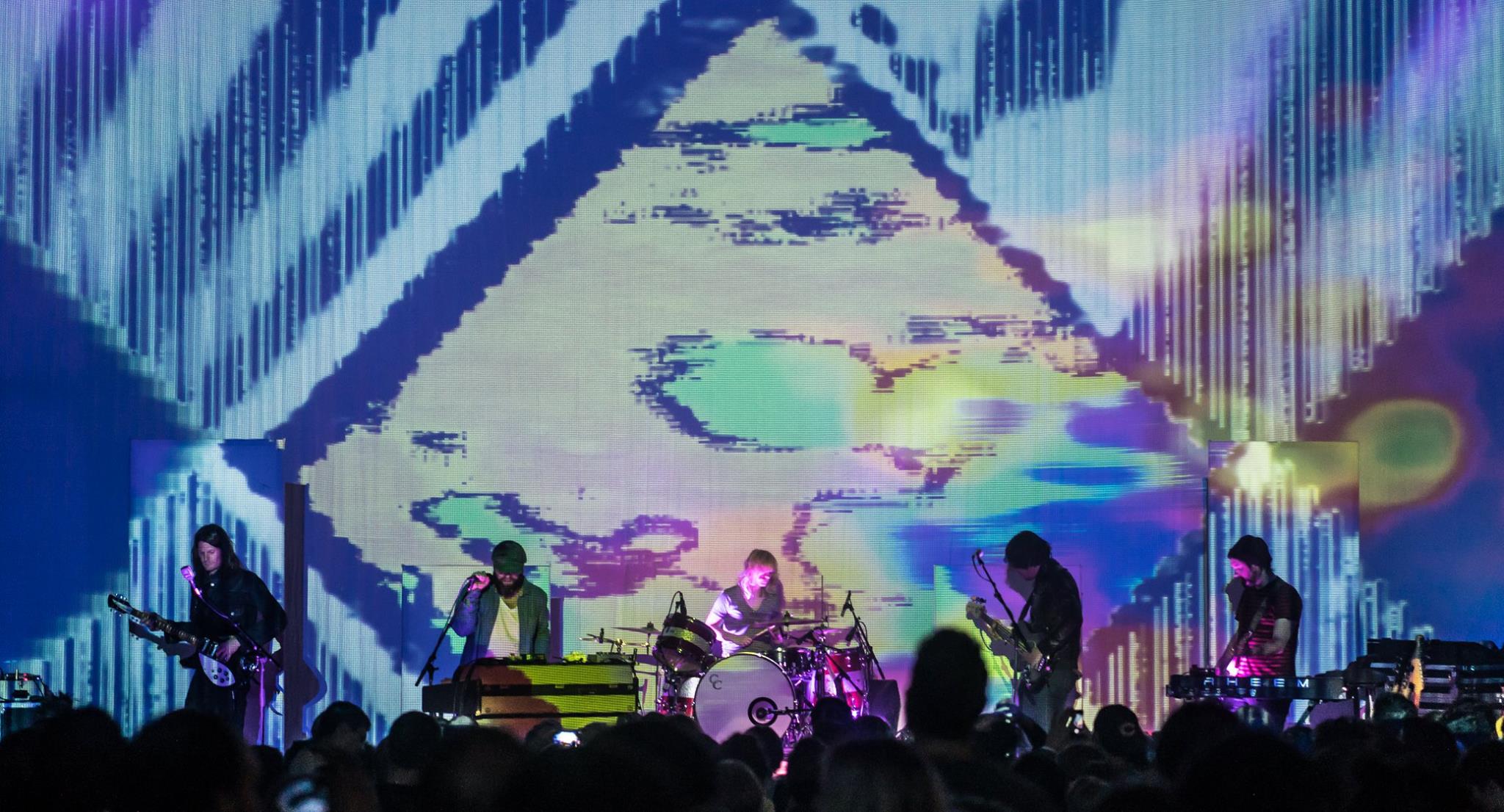 From the lumbering, quick fade in droning and then power punch pace of ‘Currency’ through the almost surf-punk guitar tone of ‘I’d Kill For Her’,  to ‘Half Believing’ with the soft-touch intro as Christian tells of ‘half believing, half suspicious’ show that this disc is full of the things we have come to expect and so much MORE than imagined. ‘Comanche Moon’ opens with a ferocity not implied by the name of the song while ‘Grab As Much (As You Can)’ has this ‘happy’ bouncing bass line that belies the real feel of, just as ‘Estimate’ could be a dirge by the beginning measures and ‘I Dreamt’, ‘Hunt Me Down’ and ‘Medicine’ are even more expressions of the multiple directions that THE BLACK ANGELS show they are more than capable of and are happy to lead us to.

The last two tracks on this opus, ‘Death March’ and ‘Life Song’ fit the flow of this track order and help define the title of this record and, in MY opinion, should be played one after the other in a live format as they compliment each other and again seem to offer the defining moments of this album serving as the bookend. If you are familiar with this band, you will be thrilled beyond what you may have been thinking you could expect. If you have never heard of them, this is a great place to start and then the previous releases will serve as the ultimate “pre-quels” for you. Grab the record IMMEDIATELY and support them by going to see them if they come to your area, tell everybody you know about them and turn it UP!!

Born Feb 12 2010, Dallas Texas, Consisting of brothers Kyle Juett on bass/lead vocals, Kelley Juett on guitar/vocals, and Judge Smith on drums, these guys have a unique sound that demonstrates that Mothership’s goal from the beginning has been to carry on the tradition of classic rock stylings of the ’70′s, updated and re-calibrated and amped up for the modern day fan of thick lumbering tone maxed out with all the distortion there is to be found.

Eight tracks make up this 33+ minute offering and this represents the third studio album of four releases (based on what I could track down) and in my opinion is the most solid outing from the Juett brothers and Judge Smith together, showing a musicianship that comes from lots of time playing together to become the cohesive unit that MOTHERSHIP shows themselves to be with this outing.

Opener and title track ‘High Strangeness’ is a nice slower even-keel instrumental that will suit the biggest stoner-fan with all of the elements in place to take you back in time to the days of MAHOGANY RUSH with the spaced out guitar solos that fly in and out over the even bass line that carries the melody of this track all the way to the left/right bouncing of some faraway sounding signal that slowly fades out. ‘Ride The Sun’ follows with a faster tempo than the previous and again, shows that virtuoso type of riff that dominated the underground rock world of later 70’s bands including the tone of the likes of UFO and MAX WEBSTER and THE GODZ with the stop/start soloing and phrasing and does not relent during the entire 4 minutes. ‘Midnight Express’ wastes no time with a double-measure drum intro before the brothers kick it in together with a heaviness to the tone that will hit you between the eyes and Judge does his all to be right out in front, hitting his drums as hard as it sounds, and then the last minute of, the pace almost doubles and there is no hesitation to run along with.

‘Crown Of Lies’ has a pace that could almost be a tip of the hat to HEART’s anthem ‘Barracuda’ w/ the double palm-muted gallop picking and is one of the stronger lyrical tracks on this album and is filled with more twists rhythmically than any other track contained, invoking the 70’s gods of jam-bands as the multi-layered solo’s sear your brain with the fury of each note. ‘Helter Skelter’ is NOT a BEATLES cover but instead sounds more like THE HUNT meets DIAMOND HEAD in pace and progressions and tells Mothership’s tale of their own dealings that garnered this moniker. ‘Eternal Trip’ is a pure guitar piece that allows Kelley to shine in his own spotlight with a piece that is hauntingly beautiful in its saturated state of reverb with a clear guitar tone that you can feel rolling across your tongue as you take it in.

Standout track on this one for me, oddly enough, is the last song ‘Speed Dealer’ and for the first couple of measures, I felt the need to crank it up to ’11’ for the full impact of this juggernaut of heavy riffs and wash cymbal and was happy as fuck that I did with the power that screamed from the 14’s that were jumping to the quick fade.

They are indeed touring this one RIGHT NOW and it would be in your very best interest to support these guys in the LIVE format for the effect I just got from my measly speakers.  Get the album and catch ’em when they show up in your town!!