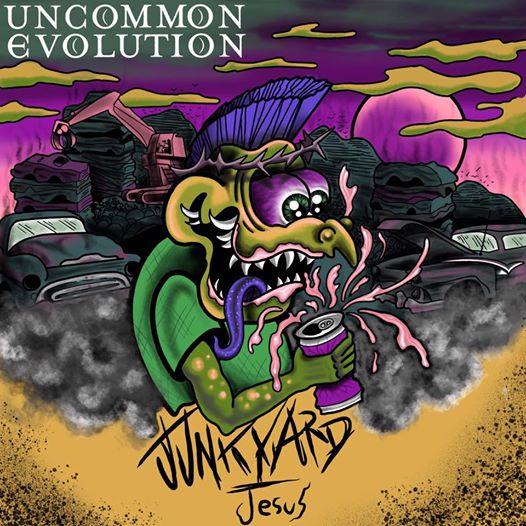 From the high end low country of rural Montana comes the next step in the Darwinism advance of heavy rock, Uncommon Evolution and their latest 4 song EP, ‘Junkyard Jesus‘. Due for release this Friday, June 30th from Argonauta Records, this granite-hard slab of stupendous stoner rock is a monstrous movement crammed into a short-playing offering. Not unlike the Uncommon Evolution‘aries neighboring state South Dakota’s National Monument Mt. Rushmore, ‘Junkyard Jesus‘ deserves his very own recognition. Perhaps the residents of Montana might see fit to create their own tribute to their imminent favorite sons, Briar Gillund (vocals/guitar), Matt Niles (drums), Rick Bushnell (bass) and River Riotto (lead guitar).

What this fantastic foursome has carved out on this EP is nothing short of powerful and astounding, as well as energetic and enthralling. With mile-wide fuzzened riffs fueling these four cuts, they slither forward with swagger and surety. Gravity-generating grooves so deep they seem bottomless twist and turn without warning, pulling you along for the ride. All of this begins the very instant that the opening title track begins as “Junkyard Jesus” unfolds the tale of the regal one of refuse, the lord and master of scrappin’ himself, J.J. Rife with bluesy overtones and tightly packed rhythms, the song is an anthemic ode that serves to set things up for what may be my favorite song, the second cut, “Highly Modified Son Of A Bitch“. This slowly simmering scorcher is the kind of song only crafted after lengthy influence from the likes of Clutch, Planet Of Zeus or Wasted Theory. Its intertwining music and vocals yields a beefy number that is impossible to ignore.

The super cool infused sonics continue with the semi-doomish blues of “Feather Short Of Flight” as it alternates between slow jam verses and increasingly more uptempo choruses. Fat bottomed guitars churn and chug it out while the gargantuan, gravelly vocals spin yet another intriguing yarn you will refuse to resist. The subtle synths bubbling beneath the surface of the song at certain points is a damn fine touch too. Things end with the fourth and final track “King Of The Heep“, a furiously quickened cut that rips and tears along with some dizzying drums and outright intensity. The much more effect-heavy vocals are more aggressive, muddied with a seeming bloodthirstiness that works well within the confines of the song itself.

Grit, swagger, balls and burly machismo permeate each fiber and every moment of Uncommon Evolution‘s ‘Junkyard Jesus‘ EP. Still a relatively young band, one that formed in 2013 and has released two prior EPs, this latest effort from the irregular mutations is, simply put, remarkable. It is a fiercely unforgiving salvo of heavily southern-imbued stoner rock awesomeness and it will flat out rock you to your very core. Allow it to do so now via the Soundcloud embedded stream below and then go get this sumbitch this Friday, June 30th on Argonauta Records (purchase here).